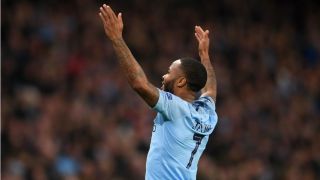 Raheem Sterling has apologised to referee Viktor Kassai and Shakhtar Donetsk after he was wrongly awarded a penalty in Manchester City's 6-0 Champions League triumph.

The England winger went down in the box after 24 minutes having kicked the turf as he shaped to shoot in Wednesday's Group F clash.

However, Kassai believed Sterling had been brought down by Mykola Matvyenko and promptly pointed to the spot, allowing Gabriel Jesus to net City's second.

City boss Pep Guardiola appeared to motion that he did not agree with the decision and Sterling himself accepts that he was the beneficiary of an incorrect call.

"I went to chip the ball and I don't know what happened next," he told BT Sport. "I ended up on the floor and turned around...

PEP: We realised it was not a penalty. We don't like to score a goal in that situation but didn't realise. He wanted to make a chip but touched the grass.Referees must be helped - the game is quick - fast - players are more skilled.November 7, 2018

Discussing City's win, which featured a Jesus hat-trick and sends his side three points clear of Lyon at the top of the group, Sterling added: "It was massive. We needed to get the win to keep the pressure on the others and that's exactly what we've done."

"I need a couple of days now," said Sterling. "We'll take it slowly, do our recovery and prepare for that.

"It'll be a massive game at the weekend, but I'm sure we'll try to do our best and try to get the three points."