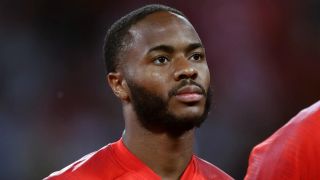 England winger Raheem Sterling made history with Manchester City last season and, while many people were impressed, his daughter was not one of them.

The Premier League champions became the first team to reach 100 points in a season after dominating the league and securing the title in April.

Despite being a crucial figure in the team, scoring 18 times as they won the league and the EFL Cup, he could not convince his daughter to change her loyalties to his current team.

Writing in The Players' Tribune, former Liverpool star Sterling said: "The other day, my daughter's running round the house singing a little song. And her dad just won the league with City. Just got 100 points in the league actually.

"Does she care? Haaaaa! Mate, she don't give two Scooby-Doos about Manchester City. She's Liverpool through and through.

"So she's running through the halls – and I swear to God she runs exactly like her dad. Chest puffed way out, back arched, hand flapping about a bit.

"She's running through the halls like Raheem Sterling, and you know what she's singing?

"Can you believe that? Cold-blooded, mate."