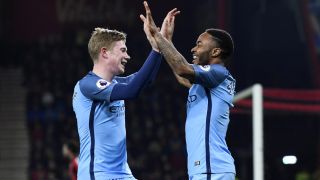 De Bruyne and Sterling are set to do battle in Group G, with Belgium and England meeting June 28.

The duo starred to lead City to a record-breaking title success in the Premier League in 2017-18.

And De Bruyne believes his club team-mate, who scored 18 goals and provided 11 assists in the Premier League last season, is ready to dominate for England in Russia.

"He's a special player. This season he was playing at such a high level and he's only going to get better," he told The Mirror.

"He's a winner – any criticism he has faced in the last few weeks I know he will just ignore. At Manchester City he's so focused on success and I know he would have the same attitude with England.

"He scored many goals last season, but he scored important goals too – goals that won games in the last minute – and that takes a special type of player.

"On the big occasions he has the confidence – that is why I think he will light up the World Cup."

Sterling and England face a huge test to finish top of their group, with Belgium heading into the World Cup with a star-studded squad.

De Bruyne said Roberto Martinez's men were full of belief, with their first outing a clash against Panama Monday.

"We know this Belgium squad is special and, of course, we're desperate to win a trophy," he said.

"We have the belief, but there can only be one nation that wins the World Cup – but we're ready for the fight."