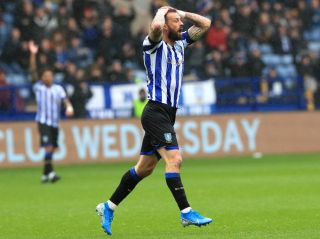 Sheffield Wednesday striker Steven Fletcher has been ruled out for over two months with a knee injury, Owls boss Garry Monk has confirmed.

Fletcher was carried off on a stretcher midway through his side’s FA Cup win at Brighton over the weekend after landing awkwardly following an aerial challenge.

But Monk confirmed there was “good and bad” news concerning the Scot, who will not require surgery despite initial fears over the extent of the injury.

Monk told local media: “When you looked at his initial reaction and how he was, it looked like it was very serious.

“He’s had the scan and we thought it looked like it was going to be a very serious one, but he’s come back and structurally his knee is fine.

Fletcher has scored 12 goals for the club this season despite also missing much of the hectic festive programme due to a virus.