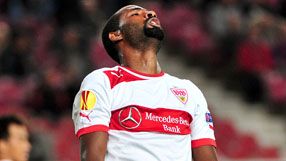 VfB Stuttgart striker Cacau has been ruled out for at least three months after tearing ligaments in training, the club said.

"I am sad to have been injured that badly in training and in such an innocuous situation and to be missing in these difficult weeks ahead," said the 31-year-old, who earlier this year lost his spot on the Germany squad.

Stuttgart, in 15th place with six points from seven games, travel to Hamburg on Sunday.

Bayern Munich winger Arjen Robben will remain sidelined after a nagging thigh injury ruled him out for the last three weeks.

"It is just frustrating," said the Dutch winger, who has played three league matches so far.

"I feel basically fit but have been out for three weeks," he told Bild newspaper on Friday. "I want to play, help the team but I don't know when I can play again. I have to be patient."

Bayern, who travel to Fortuna Dusseldorf on Saturday, have not been affected by Robben's absence, winning seven out of seven league matches to top the table on 21 points.

Schalke 04 will be without central defender Kyriakos Papadopoulos, who has had chicken pox, in their Ruhr valley derby against champions Borussia Dortmund on Saturday.

Schalke coach Huub Stevens could also be without teenager Julian Draxler and Christoph Metzelder, who got a knock on his knee in training on Wednesday.

Draxler broke his arm earlier this month and is wearing a cast.

"If Julian does not have problems with it then he could be in the squad," said Stevens.

Schalke are third on 14 points with Dortmund, whose playmaker Mario Gotze return injured from international duty, two points behind in fourth.