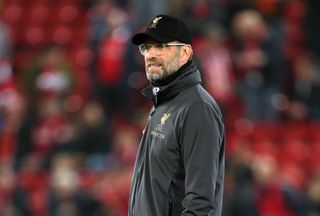 Liverpool manager Jurgen Klopp insists it is “mad” to suggest accepting a Champions League exit to help their domestic title push would be a preferred option.

Since the start of the season there have been pundits who have said the Reds’ Premier League hopes would be best served by exiting Europe as soon as possible.

And, while Klopp admits defeat against Bayern Munich in the Allianz Arena in the second leg of their goalless last-16 tie would not be the biggest surprise in the competition’s history, his side will not go into the game thinking of the benefits such a result could bring.

“They (pundits) talk constantly. It doesn’t mean they make more sense because of that. That’s the problem,” said the Reds boss.

“I really don’t think that any other coach or manager in the world has to answer this question when he plays in the Champions League.

“It’s really unique. It only happens if you are the Liverpool manager and the pundits come from Manchester United and start these things.

“It is so easy to sit in an office or a studio and talk about things like that.

“We don’t draw up a season and say the best way to go through it is to go out of all the cup competitions early.

“You do that and in that moment the same people go for you like mad.

“Now it is closer to the end of the season and it is allowed to go out of the Champions League without even trying to go through? That’s really mad.

“I am not angry about it. It’s just so mad that I constantly get confronted by it.”

Klopp stressed Liverpool, who reached the final last season and are second in the Premier League, just a point behind Manchester City, want to prove they a “proper threat” in the competition.

“We play proper, real football and we try to win every game,” he added.

“The only thing I would say is that if we go out, maybe the fans won’t be exceptionally angry – ‘How can that happen?’ – because we still have a chance with the league.

“But I don’t think they will think before the game, ‘I hope we go out’. It is not that the players prefer the Champions League to winning the league.

“We still want to prove our value again in Europe. I think that is really important for the club that we really show we are a proper threat in that competition.”

Bayern took great satisfaction from a goalless draw at Anfield three weeks ago and Klopp took that as a sign of the reputation his side have in Europe.

Since then Liverpool have lost top spot domestically, while Bayern have regained the initiative in the Bundesliga, but the Reds boss does not believe the dynamic has been altered.

“We are a proper contender in a difficult competition with only fantastic teams left,” he said.

“Bayern is famous for going for results they think are good for them and on the night they thought 0-0 was the perfect result.

In order to progress Liverpool will have to end a run of five successive European defeats away from Anfield – a sequence Klopp said had no underlying reason.

“It is nothing to do with being away from home, but of course we have to prove it,” he said.

“It is different, yes, but it is not that we are not able to perform in an away atmosphere.”