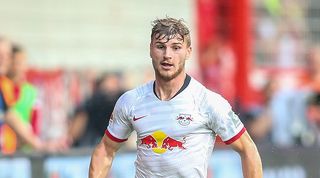 Former Liverpool midfielder Dietmar Hamann believes it would be a mistake for Timo Werner to join his old club.

Werner has been heavily linked with a move away from RB Leipzig, for whom he has scored 26 goals in 32 appearances this season.

The striker struck the winning goal against Tottenham in the first leg of the two teams' Champions League last-16 tie on Wednesday.

And he has already racked up 20 strikes in the Bundesliga as Julian Nagelsmann target the title.

Werner has been spoken of as a transfer target for Liverpool for some time, but Hamann does not think he would be an ideal fit with Jurgen Klopp's side.

"Timo Werner has continuously improved, he has scored again in the Champions League and has already scored more than 20 goals in the Bundesliga this season," the former Red told Sky Sport.

"I trust him to play in a very big team soon. It is of course an honour for him to be linked to Liverpool.

"The question is: does he match Liverpool? For me he is strongest when he comes through the middle and can use his greatest weapon: his speed.

"With [Roberto] Firmino, Liverpool have a striker who is always playable and connects a lot with his team-mates.

"If Werner went to Liverpool, I would rather see him outside, but there are two absolute grenades in the team with [Sadio] Mane and [Mohamed] Salah. If none of the three strikers get injured or move, he won't play and I don't think that's what he wants.

"Liverpool is the absolute benchmark, but in my view he would be better suited to Manchester United or Chelsea."

Klopp's men were beaten 1-0 by Atletico Madrid in the first leg of their Champions League last-16 clash, and Hamann predicts that Liverpool will find it tough to overturn the deficit.

"It will be difficult for Liverpool after the defeat at Atletico," he added.

"After winning 4-0 in the second leg last season against Barcelona [in the semi-finals], ​​everyone thinks they can do it, but they didn't have a single shot on goal in Madrid.

"It is nothing new, however, that they have their problems away from home, that was already the case last season. Atletico will also tear up in Liverpool, I expect a fascinating second leg."