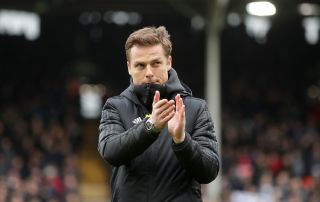 Fulham captain Tom Cairney has called for caretaker boss Scott Parker to get the job permanently.

The midfielder wants Parker to lead the Cottagers despite their relegation to the Sky Bet Championship last month.

Leander Dendoncker’s late winner condemned the Cottagers to a 1-0 defeat at Wolves on Saturday, their 25th loss of the Premier League season.

It ended a three-game winning run but Parker has impressed since replacing Claudio Ranieri in February and Cairney wants him to manage the club full-time.

“I’ve said for a long time that I think Scott has done an incredible job and, in my eyes, I think he is the right man for the job,” he told Sky Sports.

“The way he has got us playing in such a short space of time, in the hardest league in the world, is a credit to him. I believe he is the man to take us forward so we’ll see.”

Parker had also called for clarity with Fulham heading into their final game of the season at home to Newcastle next week.

He said: “Not just for me, as a club ahead of what’s going to be a massive year, we need to have a clear idea of what way we are going to go.

“We’re seven days away from ending the season and a lot of planning needs to go into next year. I’m sure it’ll come in due course.”

Dendoncker struck 15 minutes from time, volleying in Matt Doherty’s cross having already hit the crossbar with a first-half header.

It would bring a Europa League qualifying spot if Watford lose in the FA Cup final to Manchester City.

Boss Nuno Espirito Santo said: “I’m proud of how we played every game. The draws, the games that we lose, the way we lose – even in the FA Cup, I’m proud of that, because it was a big moment for us.

“I’m proud of every minute, even the training sessions, every minute. The achievement is for the players because how we did things here is important. How we did it.

“We started with a squad of 18 – plus goalies, then in December we reduced the squad to 16, and these players made it.