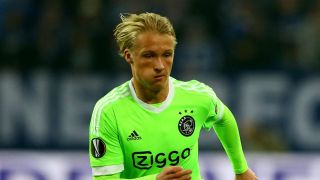 Ajax forward Kasper Dolberg believes it is too soon for him to leave for clubs like Manchester City or Manchester United.

In his first campaign with the senior side, the 19-year-old has scored 19 goals in all competitions this term to help Peter Bosz's side mount a challenge for the Eredivisie title and reach the Europa League semi-finals.

Dolberg, who made his first appearance for Denmark against Kazakhstan last November, is not yet ready to think about leaving Amsterdam, despite reported interest from a host of Premier League clubs.

The Dane has no ideal destination when the time comes for him to move on, but he hinted at a boyhood preference for LaLiga giants Barcelona or perennial Premier League top-four contenders Arsenal.

"It's too big a step to go to City or United now," Dolberg told FourFourTwo.

"It's important to keep on playing, as I don't know what could happen in the future.

"I haven't got a dream league. When I was young it was Barcelona [that was my favourite team], but once I got older I didn't have one.

"In England, I followed Arsenal because of Thierry Henry, but it wasn't like Arsenal was my favourite."