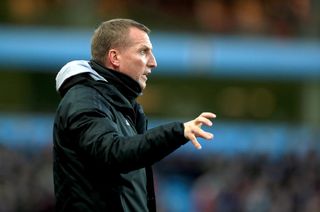 Brendan Rodgers insists Leicester remain “super underdogs” in the race for the top four after their draw with Chelsea.

The Foxes remain third in the Premier League and eight points clear of the Blues after Saturday’s 2-2 draw.

Antonio Rudiger scored his first Chelsea goals since October 2018 with a second-half double.

Harvey Barnes and Ben Chilwell cancelled out the defender’s opener before he struck again to level in the 71st minute during a frantic second half.

Blues boss Frank Lampard had said Chelsea are underdogs for the top four after failing to make a January signing but Rodgers believes his Foxes are the bigger long shot.

He said: “We must be super underdogs, to go from where were at the start of the season.

“Frank has done a brilliant job, they have lost Eden Hazard but see the players they have on the field. For us to be where we are the players have been incredible.

“We still have a lot of work to do. We didn’t lose any ground today but there’s still a huge fight for us to stay where we are.”

Rudiger headed Chelsea ahead 57 seconds into the second half from Mason Mount’s corner.

Barnes levelled eight minutes later when his shot deflected in off Reece James and Chilwell put Leicester ahead, firing in at the far post after goalkeeper Willy Caballero went walkabout.

Rudiger levelled with a fine header from Mount’s free-kick but Leicester could still have snatched the points.

Rodgers also felt Leicester should have had a penalty in added time after the ball hit Rudiger’s arm.

He added: “If we don’t get that handball I’m not sure we’ll get another one. That’s as clear as you can get. It hits his hand, he is swivelling around and he’s been quite cute about it as well to stop it.

“We didn’t get it in the week (against Aston Villa) and if you’re not going to get it – which is the whole reason for VAR – I don’t have any great hope of getting many more after that.”

Chelsea are seven points ahead of Manchester United, before United’s game with Wolves on Saturday evening and Lampard was satisfied with a draw at the King Power Stadium.

He said: “I think it was a fair point on play. In the first half we were the better team. We had some good chances.

“I know we gifted them a few too but our work rate without the ball and some of our stuff on the ball was good.

“To come here and play with that personality was good. But in the second half, when they had that chance late in the game, it evened itself out. I am pleased with a point.”

Lampard also dropped Kepa Arrizabalaga for the first time in the league this season after Kepa’s inconsistent form, bringing in Caballero.

He added: “No decision is easy. When it comes to goalkeepers, you probably do give it more a little more thought and time, especially with someone who is designated number one.

“But that can’t be the end of the story. We have to be competitive.”