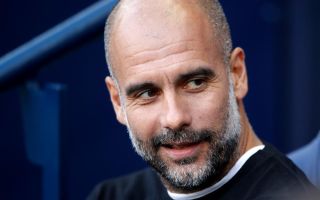 Pep Guardiola claimed last weekend’s draw against Tottenham proved his Manchester City side could go even better than last season.

City piled up 100 Premier League points in the 2017-18 season and 98 points last campaign in claiming back-to-back titles, and both times Guardiola said they could achieve more.

Though last weekend’s 2-2 draw ended in frustration – as Gabriel Jesus’ potential late winner was ruled out by VAR for the slightest of handballs from Aymeric Laporte in the build-up – Guardiola was left purring by his side’s attacking football as they had 30 attempts at goal to Tottenham’s three.

“The way we played against Tottenham showed we can do better than last season,” said Guardiola, who takes his side to Bournemouth on Sunday.

“So few games last season (were that good), even Chelsea when we won 6-0, the Tottenham game was better than Chelsea.

“Last year we arrived in front of goal and in the first five times we scored four. In football, in all sports, it is like this, but we played better.”

The challenge for City – aside from converting more of their chances – is being able to produce such displays more regularly.

“I think it is impossible to sustain every three days playing the way we played against Tottenham,” Guardiola said.

“The problem when you play every three days, you have to lift them. ‘Come on, let’s go guys, it is another one and another one’, but the level was so good. It was incredible, the way we play, so we try to keep going and build up from here.”

Guardiola is trying to lead City to three consecutive titles, something not seen in English football for a decade since Manchester United’s titles in 2007, 2008 and 2009.

Guardiola has already achieved the feat twice with both Barcelona and Bayern Munich, and believes this City side are capable too.

“I am not a guy who thinks because we have done it with Barcelona and Bayern Munich we are going to do it – those are statistics I don’t believe,” he said.

“I believe in the spirit, in the smell, in the way we played and I think we can do it.

“Of course we want to win but I didn’t feel bad against Tottenham afterwards. With the VAR again, again, again it is a little bit (frustrating) but after you sleep, you say: ‘It is OK’.”

VAR could have been irrelevant a week ago if City had simply converted their chances, but Guardiola said goals were not a problem in a City side that scored 95 in the league last season and 106 in the campaign before.

“When you look at all the goals we’ve scored in the last two seasons I don’t think you can say there are any doubts about us being able to score goals,” he said.

“We don’t have two incredible players like Cristiano Ronaldo and Lionel Messi who score 50 or 60 goals a season but, despite that, we scored incredible amount of goals in the last two seasons.

“You don’t lose that capacity and we will continue to score.”