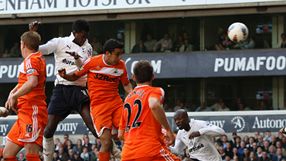 Adebayor used his physical prowess to floor a fluent Swansea side and to give fourth-placed Tottenham 58 points from 31 games, the same total as North London rivals Arsenal in third spot.

Arsenal are ahead on goal difference, with both teams trailing leaders Manchester United by 15 points and Manchester City by 13.

"We showed our true class today. The confidence is building and we're ready for a run," Spurs winger Gareth Bale told Sky Sports.

Chelsea are fifth, level on 53 points with Newcastle who motored 10 points clear of seventh-placed Everton.

A smart Gylfi Sigurdsson strike levelled matters in the 59th minute and was a fitting reward for Swansea who had loads of possession.

Togo striker Adebayor restored the advantage for Spurs with a 73rd-minute header from a corner and he wrapped up victory with four minutes remaining by converting Aaron Lennon's right-wing cross.

"We've seen Adebayor do that before, not just against us," said Swansea manager Brendan Rodgers.

The slick style of play shown by the visitors earned high praise from Wales winger Bale.

"The way they play the ball is just unbelievable, all credit to them," he said.

Newcastle number nine Cisse, equally as imposing as Adebayor, headed his team in front from Hatem Ben Arfa's 19th-minute cross before side-stepping goalkeeper Pepe Reina to notch his second goal in the 59th.

It was a miserable afternoon for out-of-sorts Liverpool who felt they should have been awarded a first-half penalty when Danny Simpson appeared to handle the ball on the line.

Liverpool had Reina sent off with eight minutes remaining when he was adjudged by referee Martin Atkinson to have headbutted James Perch after being tripped by the defender.

Television replays showed Perch made the most of whatever contact there was.

Reina's late sending-off was a sign of frustration, according to manager Kenny Dalglish who has won only two league games in 2012.

"It was the frustration of being behind," he said. "When Andy Carroll comes off and runs up the tunnel it's purely disappointment and frustration.

"It's all very well having that but we have to manage that and channel it in a proper way. If we don't stick together and have trust in each other it is going to be a lot more difficult."