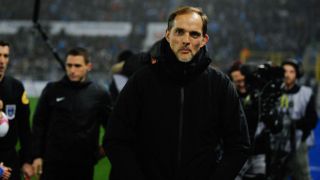 Thomas Tuchel paid tribute to Paris Saint-Germain for rescuing a point at Strasbourg, suggesting his players have struggled to lift themselves again since beating Liverpool in the Champions League.

PSG defeated last season's Champions League finalists Liverpool in a make-or-break European tie last week, but they have drawn against both Toulouse and Strasbourg in subsequent matches, ending their winless start to the Ligue 1 campaign.

Tuchel's PSG required an Edinson Cavani penalty to cancel out Kenny Lala's own spot-kick in a 1-1 draw on Wednesday and could have lost the game as Strasbourg pushed for a late winner.

Yet Tuchel has no problem with PSG's performance levels dropping from the Liverpool game, admitting it is difficult to consistently deliver.

"I can't expect my players to have the same mindset as Liverpool," the head coach said. "We have shown a beautiful state of mind in Bordeaux and today. We attacked and defended together."

Of PSG's latest stalemate, Tuchel added: "It was difficult to find space while controlling the counter-attacks and not losing the ball softly.

"Strasbourg can defend in numbers and they play with a lot of quality with the help of supporters."

Tonight our matador recorded his th goal of the season in December 5, 2018

But midfielder Julian Draxler was unhappy with PSG's performance and now wants the team to improve ahead of another crunch Champions League clash with Red Star Belgrade.

"I don't think we played well. In the first half, we didn't find any space," he said.

"[Strasbourg] defended well. It's always hard to play here. Like last year we knew it would be difficult. They give everything. It's hard to play against them.

"That's a second draw in a row. We need to improve and our next game is very important in the Champions League.

"In the season, there are always harder moments. We didn't lose - let's not forget that - but we do need to play better. Normally a team like ours would win here, but there are good teams in Ligue 1 and that was proved today."

PSG must win in Serbia to be sure of their place in the next round, but they are still a healthy 14 points clear at the top of Ligue 1.