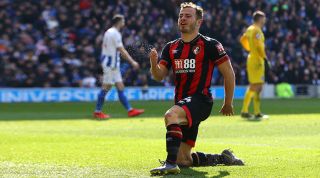 PSG have made David de Gea one of their top targets this summer and will offer him a bumper package to entice him away from Manchester United, the Daily Star reports. The paper says PSG are willing to double his wages and give him a long-term deal worth £450,000-a-week. The Spaniard’s current deal at United runs out next June and he has yet to agree a new contract.

Inter Milan are continuing their pursuit of Manchester City defender Danilo and are willing to offer him a three-year contract, according to the Daily Mail. The Serie A side are looking to propose a deal for around £18 million including add-ons, the paper says.

Ryan Fraser could leave Bournemouth this summer as he looks to play for a top-six club, the Daily Mirror says. The 25-year-old has attracted the attention of Arsenal following an impressive season so far, while Tottenham and Chelsea are also monitoring him, and he is becoming increasingly keen for a move while his stock is so high, the paper claims.

Liverpool look set to hand Alex Oxlade-Chamberlain a new contract after his return from a long-term knee injury. According to the Daily Mirror, the 25-year-old will sign a 12-month extension to take him up to 2023.

Youcef Atal: The Nice right-back is among the summer targets for Chelsea if FIFA lifts the club’s transfer ban, the Daily Telegraph says. The 22-year-old Algeria international is being tracked by a number of European clubs, such as Bayern Munich and Atletico Madrid, and would cost at least €40 million (£34.6m), the paper claims.

FEATURE What the hell is 'bottle' anyway? Behind the footballing Twitter troll's favourite word...