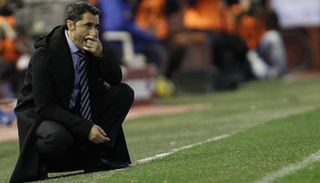 Surprise contenders Sociedad are edging the contest at present due to a superior head-to-head record over Valencia, with the two tied on 59 points in fourth and fifth respectively, and with three games left to play.

Champions Barcelona, second-placed Real Madrid and third-placed Atletico Madrid have already made sure of their automatic qualification to Europe's premier club competition, and one play-off place remains to be decided.

Sociedad's impressive 15-match unbeaten run ended in a 2-1 defeat at Getafe a week ago, and Monday's 2-2 home draw against relegation-threatened Granada suggests the pressure might be starting to tell on a team more used to fending off relegation.

The side from San Sebastian have played some of the league's most entertaining football this season, with a team comprised mainly of home-grown talent and directed by French coach Philippe Montanier.

"It would be a dream come true for me and for everyone else [to reach the Champions League], it's very difficult for a club like Real Sociedad to achieve," midfielder Markel Bergara told a news conference.

"It's in our own hands and we'll fight to the very end to achieve it."

Montanier's two-year contract is up at the end of the season and negotiations for an extension are on hold, with media speculation linking the Frenchman with a return home to coach Rennes.

"Montanier knows La Real want him to continue, but the club isn't finished without him or anyone else," Sociedad president Jokin Aperribay said last week, denying the decision was linked to whether the club qualified for the Champions League.

"It depends only on his and our willingness."

Consecutive 4-0 wins have put Valencia back in the running for a Champions League return under the stewardship of Ernesto Valverde (pictured), who was brought in to replace Mauricio Pellegrino in December, with a contract to the end of the season.

Valverde has won over the dressing room and fans in a short space of time, but institutional instability at the heavily-indebted club and the resignation of president Manuel Llorente last month has made long-term planning difficult.

The club are due to appoint a new president on June 4.

"It would be disruptive to suffer another change on the bench. The squad is very pleased with Ernesto," leading scorer with 21 goals Roberto Soldado said.

"The results are there. We have improved a lot."

Bottom club Real Mallorca are five points from safety and have to beat visiting Real Betis on Monday to have any chance of avoiding relegation.