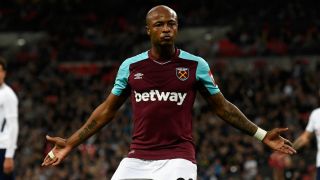 The Hammers were insipid in the first half at Wembley on Wednesday and deservedly found themselves two goals down at the break after Moussa Sissoko and Dele Alli strikes.

Bilic's side came out for the second period with renewed vigour, though, and produced a stirring fightback, which saw them score three times in just 15 minutes.

Two goals from Andre Ayew pulled them level before Angelo Ogbonna thumped a header past Michel Vorm to secure an unlikely win and provide his under-fire manager, who hailed his players' reaction after half time, with a huge boost.

Bilic told Sky Sports: "We did not penetrate Spurs enough, were not good in the final third and we said things about what we should do when they and ourselves have the ball.

"We reacted in the most brilliant way. To score three goals against them, who do not concede goals, then be brave and compact and good on the ball, we deserved it and it is a big boost for us.

"Goals are always key; they give the whole team energy. [First] we did not want to concede the third and then [we wanted to] score ourselves. We did that and had more confidence, it gave us rhythm and they got out of rhythm.

"We kept going, kept pressing and in the second half were closer in midfield to Alli and Sissoko, who are good at breaking forward. It was a really very good team performance."

Despite the comeback, Bilic will remain in the spotlight as the Hammers return to Premier League action with an away London derby against bottom-of-the-table Crystal Palace on Saturday.

Two-goal hero Ayew is urging his team-mates to quickly shift their attention to that crucial contest.

"I want to congratulate the whole team, it's a massive win," Ayew said.

"We have a massive game on Saturday. We have to enjoy this, but prepare for Saturday.

"We knew if we scored early in the second half we'd have a chance. We need to relax and work hard because Saturday is a big one."