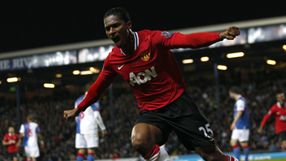 Second-placed Manchester City's 3-3 home draw with Sunderland on Saturday had given United the chance to ram home their advantage and with seven games remaining they are five points ahead and now look odds-on for glory.

Ecuador winger Valencia, a driving force all game, ended Blackburn's resistance after prolonged United pressure when he came inside and sent a swerving effort into the far corner although he acknowledged it was "50/50" a shot and a cross.

Substitute Ashley Young grabbed the second in style on 86 minutes.

"It was a long night wasn't it? We just had to persevere and persevere and we got our reward for it," United boss Sir Alex Ferguson told Sky Sports.

"We always had them under the cosh and we just had to be careful with the counter-attack."

Ferguson, whose side trailed City for much of the season but can extend their lead on Sunday at home to Queens Park Rangers before City visit Arsenal, did not care if Valencia meant to score.

"Coming so late in the game [the goal] is important. If you don't try to shoot you'll never find out if you are going to score," he said.

United, who lost to local rivals Blackburn at home in December, also have a patchy record at Ewood Park but won a record 19th English title there last season and always looked dangerous.

It was a professional display that fans expect of experienced title pretenders United at this stage of the season and they never panicked despite time ticking away.

Ferguson opted for a midfield three to combat Blackburn's physicality and United were on top from the off.

Striker Javier Hernandez scuffed wide after a superb long ball from Wayne Rooney and the Mexican had another opportunity soon after but Paul Robinson saved on the line.

The visitors continued to press but Blackburn, now inside the drop zone on goal difference from QPR, came into the game a little more and the vastly improving David de Gea was forced into a smart stop from Junior Hoilett.

The second half was a bit more balanced and Blackburn's Morten Gamst Pedersen had the ball in the net but the officials ruled it had gone out of play previously.

United came back at them without managing any clear-cut efforts on goal until Valencia struck to send a dagger into the heart of City boss Roberto Mancini, who had predicted a draw.

Pundits agree that United's side is not as strong as some of their other championship teams and there could still be more twists in the run-in, especially with City hosting United on April 30.

However, Monday's performance was the archetypal title-winning display.