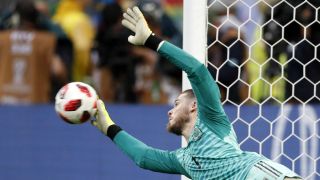 David de Gea's awful World Cup ended on Sunday as Spain were dumped out of the tournament by hosts Russia, who won a penalty shoot-out 4-3 in Moscow.

After a 1-1 draw at the Luzhniki Stadium, De Gea's opposite number Igor Akinfeev was the hero for Russia, saving penalties from Koke and Iago Aspas.

De Gea did not save any of Russia's four kicks, with Denis Cheryshev among those to score with relatively poor efforts.

Spain's number one made a terrible mistake to allow Cristiano Ronaldo to score from the edge of the box in a 3-3 draw with Portugal to start the group stage.

Although De Gea kept a clean sheet when untested in a 1-0 defeat of Iran, he then conceded twice in a 2-2 draw against Morocco as Spain edged through to the last 16.

De Gea – for who United often use the social media hashtag #DaveSaves – went into the tournament regarded as one of the best goalkeepers in the world but heads home having faced 11 shots on target - including the Russia shoot-out - and only able to save one.

Khalid Boutaib was the only player denied by De Gea across his four World Cup matches, but the Morocco forward still beat the goalkeeper in the draw.

De Gea also made a bad error in a pre-World Cup friendly against Switzerland, and the goalkeeper will want to quickly restore his reputation with United when the 2018-19 campaign begins.