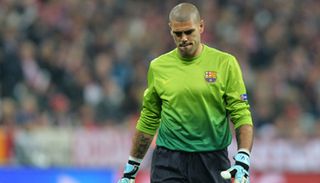 "I know I owe the club members and fans an explanation for why I decided not to renew my contract," the Spain international told a news conference attended by team-mates Andres Iniesta, Carles Puyol and Xavi.

"Barca has given me everything and I owe them everything, but being a goalkeeper here takes it out of you. It is an irreversible decision and I didn't want people to debate the economics of a possible new contract and how much I love this club.

"I have a year left but I am open to talks with the club to find the best solution for both."

Valdes has been linked in the media with big-spending Monaco after he said earlier this year he was thinking of leaving Spain to experience different cultures and different leagues.

It remains to be seen whether Barca cash in on Valdes and use the funds from a sale to buy a replacement rather than see him leave for free next year.

The 31-year-old has been Barca's number one since the 2003/04 season, helping them win six La Liga titles and three Champions League crowns.

He has also won five Zamora trophies for being the goalkeeper to have conceded the fewest goals in a La Liga season.