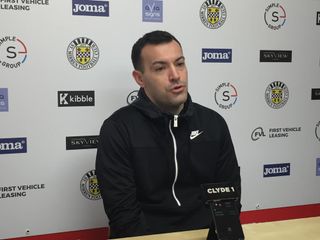 Ross Wallace’s career began with Jim Goodwin cutting him down to size at Celtic, but he is delighted to team up again with the St Mirren boss in Paisley.

The 34-year-old utility player came through the youth system at Parkhead and his mettle was tested in training against Goodwin, who was in the Hoops’ reserves at the time.

Wallace left Celtic in 2006 and played for Sunderland, Preston, Burnley, Sheffield Wednesday and Fleetwood before signing a contract until the end of the season with the Buddies earlier this week.

Ahead of the trip to Fir Park to play Motherwell on Saturday, the Scotland cap recalled with humour his first impressions of Goodwin, who went on to play for Stockport, Scunthorpe and St Mirren among others.

He said: “I was coming through and the gaffer used to kick lumps out of me.

“He was a really good player himself. He was managerial material then, he was always organising, talking to people and driving people on.

“You could tell he was going to be a manager

“It is perfect for me and I am buzzing to get going. I love playing football. It is a brilliant job.

“I am fit, touch wood I haven’t had any bad injuries and everyone says keep playing as long as you can.”

Goodwin said: “Ross was one of the young boys coming through at Celtic.

“I think he is four years younger than me and he was one of the new kids on the block and a real quality player.

“I couldn’t get near him, so the only way to prevent him running rings around me was to give him the occasional kick up the backside.

“But he has had a great career at Celtic and in England. It is good to get him in. He is a good role model for the kids.”

St Mirren face a double-header against Stephen Robinson’s Motherwell side after their William Hill Scottish Cup tie in Paisley last week ended in a 1-1 draw.

Following Saturday’s Ladbrokes Premiership meeting, the cup replay is at Fir Park on Tuesday night and the sides have already faced off twice in the league.

Goodwin said: “I think we will be sick of the sight of each other by the middle of next week.

“Both sets of players and especially Stephen and me have a fair idea of what the other one is going to do.

“Even the analysis meeting we had this morning was groundhog day because we just did it a few days before.

“But we have just refreshed their memories to let them know what to expect.

“Hopefully Monday’s analysis meeting is a really positive one, talking about us playing well, scoring goals and picking up three points and hopefully going into Tuesday night feeling good about ourselves.”