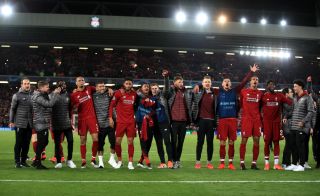 The Liverpool team stood together to sing You’ll Never Walk Alone with their fans after their stunning comeback victory over Barcelona at Anfield.

After their 4-0 second-leg victory in the Champions League semi-final, the Liverpool squad and coaching staff lined up in front of the stadium’s famous Kop End to belt out the song synonymous with the Merseyside club.

A brace for both Georginio Wijnaldum and Divock Origi saw Liverpool overcome a three-goal deficit after Barcelona’s 3-0 victory in the first leg at the Nou Camp.

The historic result was cause for jubilation for fans and the club blasted out the 1963 Gerry And The Pacemakers hit on the stadium speakers to help them celebrate.

Liverpool players in front of the Kop at the end of one of its greatest nights pic.twitter.com/sGyewazhXO— Miguel Delaney (@MiguelDelaney) May 7, 2019

The scenes were well received by fans on social media, where even rivals were able to appreciate the spectacle.

“Love them or hate them, the atmosphere that Liverpool fans can muster at Anfield would give any true football fan goosebumps,” tweeted @gamalnessim77. “Incredible!”

Love them or hate them, the atmosphere that Liverpool fans can muster at Anfield would give any true football fan goosebumps. Incredible!— Gamal Nessim (@gamalnessim77) May 8, 2019

Incredible love them or hate them that was the greatest comeback ever hats off to Liverpool— Kenneth #COYS (@starcoughlan) May 8, 2019

However some fans still saw an opportunity to tease.

Referencing a rather different moment from December 2015 when manager Jurgen Klopp had his team celebrate in front of fans, user @johnpc tweeted: “Have they drawn 2-2 with West Brom again?”

The Reds will play in the Champions League final on June 1 against either Tottenham Hotspur or Ajax.

The Dutch club won 1-0 at the Tottenham Stadium in that tie’s first leg, leaving Spurs needing to score to stand a chance of progressing to face their fellow English club.