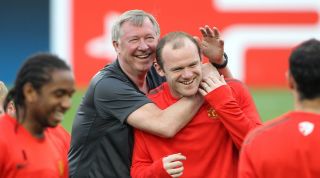 Wayne Rooney has picked out the managerial traits he most admired in three of his former Manchester United bosses.

Rooney joined Championship side Derby as a player-coach in January and has already revealed that he plans to go into management after hanging up his boots.

And United and England's all-time record goalscorer says there are aspects of Alex Ferguson, Louis van Gaal and Jose Mourinho management styles that he will look to replicate.

"[Former England and Everton boss] Sam Allardyce knew what he wanted. You can only manage to the capabilities of your team and that's what Sam has always done. Once I go into it I'm sure I'll have my own way."

Rooney spent the majority of his United career playing under Ferguson, with whom he won five Premier League titles and a Champions League.

And the 34-year-old says the Scot's ability to keep things simple was the secret behind his success.

"He was incredible. It wasn't complicated," he added. "The big thing was he had trust in people. He trusted his coaches to put sessions on, he trusted his players.

Rooney also shed light on his relationship with Cristiano Ronaldo, a player with whom he struck up a fruitful partnership at United.

"With Cristiano, when I first got to United we used to go to games and training together," he said. "I remember the night before a game stopping off at McDonald's because he wanted a Big Mac.

"He was trying to put weight on because he was so thin. I was driving the car, having to go through the drive-through to get him a Big Mac."

Rooney is under contract at Derby until summer 2021, although the club have the option to extend his deal by another year.

The Championship is currently on hold until April 4 at the earliest amid the ongoing coronavirus crisis.