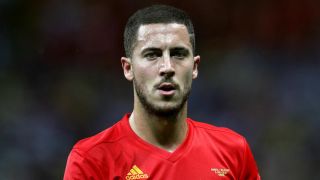 Claiming the World Cup scalp of Lionel Messi ensures France have nothing to fear against Belgium star Eden Hazard, according to Lucas Hernandez.

Les Bleus crushed Messi's hopes of winning the tournament when they dispatched Argentina 4-2 in the round of 16.

Didier Deschamps' side subsequently beat Uruguay 2-0 on Friday to tee up a mouth-watering semi-final date with Belgium, who ousted favourites Brazil 2-1 in Kazan.

Left-back Hernandez named Hazard and Romelu Lukaku as key dangers but is undaunted by the challenge of shackling the Premier League pair.

"We have already eliminated the best player in the world [Messi] against Argentina," the Atletico Madrid man told reporters.

"He didn't touch the ball. That's the truth.

"Against Belgium we also have the players to make sure Hazard touches the ball as little as possible."

Hernandez is likely to again be joined in a settled back four by Benjamin Pavard, Raphael Varane and Samuel Umtiti, although there is a slight knee concern over the latter.

Varane, scorer of France's opening goal against Uruguay, believes a collective effort will be needed to keep Belgium's attacking aces under wraps.

"Hazard is a player with great talent, with much pace and big quality," he said.

"There are no miracle solutions against him. You have to leave him little space.

"Lukaku can make it difficult for any team because of his physique. He has good players around him, but we have those too. We can hurt them up front."