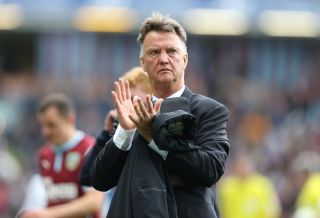 United's wait for a competitive victory under the Dutchman stretched to four games as a result of the stalemate at Turf Moor, which saw Angel di Maria make his debut following a £59.7 million move from Real Madrid.

Although Van Gaal's men were perhaps unfortunate not to be awarded a late penalty when Ashley Barnes appeared to handle a shot from Ashley Young, Burnley will feel they did more than enough to merit a share of the spoils.

In his post-match press conference, Van Gaal fielded a suggestion that United's team did not appear to be world-class, despite the star names at his disposal.

He replied: "At this moment, it is certainly not, but we have to wait and have belief in it, that it shall happen."

Van Gaal acknowledged that his comments will do little to appease fans frustrated by the team's winless start to the campaign.

"Every word what a manager says at this moment, when you have two of nine points, is one word too much," he added.

"I think in the first half we did the same as Burnley, fighting, and I think that we have to play the ball against teams as Burnley, and we have done that in the second half much better.

"We have created in the second half much more chances, but then you have to score out of the chances and we did not do that. So it's a disappointing result, I believe."

Di Maria, the most expensive player in the history of British football, offered an encouraging display on debut before being withdrawn as a precaution with 20 minutes remaining.

"It was not the world-class player that we have seen in Madrid, but you cannot expect that because he has to adapt to the English culture and the English way of playing, but also to his fellow players," said Van Gaal of the Argentinian.

"And his fellow players need to adapt to his way of playing and that needs time also.

"When I'm saying that, and I have to repeat myself, then I think everybody is tired of me, but it's like that."