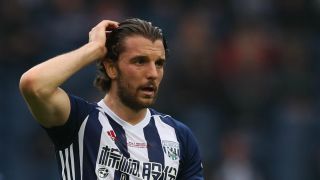 West Brom forward Jay Rodriguez has been cleared of a Football Association (FA) charge of alleged racial abuse by an independent regulatory commission.

Rodriguez was charged with using "abusive and/or insulting words which included a reference to ethnic origin and/or colour and/or race" towards Gaetan Bong during a Premier League match in January.

The Brighton and Hove Albion defender made a complaint against the West Brom player after he appeared to squeeze his nose and waft a hand at him.

Rodriguez denied making a comment that referred to his opponent's skin colour, but conceded he made a remark relating to his breath.

"Ultimately, after much deliberation we were left in the position where the case distilled to the evidence of each player," ruled the commission.

"We could not say that any of the other evidence or competing arguments lead us to prefer one over the other. When the burden and standard of proof is applied, we could not properly say we were satisfied that the player probably spoke the offending words."

A statement from the governing body read:  "The FA wishes to stress that there has been no suggestion by any party involved in this case that this was a malicious or fabricated complaint. The FA is completely satisfied that this was a complaint made in absolute good faith.

"The FA takes all allegations of discrimination extremely seriously and continues to encourage all participants who believe that they have been the subject of or witness to discriminatory abuse to report this through the appropriate channels."

We have welcomed the verdict of an FA hearing which has dismissed an allegation of racist abuse by Jay Rodriguez.April 13, 2018

"Everyone at the club is delighted for Jay because this has been a trying period for him," Garlick said.

"He has always maintained his innocence and we are naturally pleased the commission has dismissed the charge."

Tottenham manager Mauricio Pochettino and Bournemouth boss Eddie Howe - who coached Rodriguez at Southampton and Burnley respectively - were among the figures to act as character witnesses for the forward.