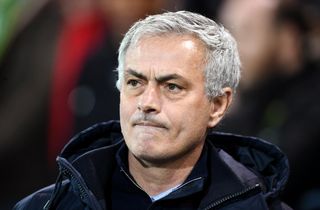 Tottenham’s season is in danger of further derailing ahead of a tricky FA Cup replay against Middlesbrough on Tuesday night.

January and what happens in the transfer window could be a decisive month and here, the PA news agency looks at what might happen.

Will they make any signings?

When Mourinho arrived at the club in November, he was quick to hammer home the point that his squad was good enough and he did not need January reinforcements. He may have been saying that to boost confidence in his misfiring squad, but the situation has definitely changed due to injuries to key players and possible outgoings. With Harry Kane and Moussa Sissoko both sidelined until April, Mourinho has said he needs another striker while a midfielder is also on his radar. But this is Spurs, so there is not going to be huge amounts of cash to spend. Gedson Fernandes is set to become Mourinho’s first signing, with the Benfica midfielder undergoing a medical ahead of a proposed loan move. There has also been talk of a move for Bruno Fernandes, but Spurs would likely have to outspend Manchester United to get him, while a host of strikers have been linked.

Who can replace Harry Kane?

There is no out-and-out replacement for Kane in Spurs’ squad and their only recognised striker is Troy Parrott – a highly-rated 17-year-old youth-team player. Mourinho has adapted Spurs’ style of play, making Lucas Moura and Son Heung-min the focus of their attack and they should have earned at least a point against Liverpool. But Mourinho will be working hard to bring a striker in during the window. AC Milan’s Krzysztof Piatek is of interest to Spurs, who are also reported to be monitoring Christian Benteke and pondering a return for Fernando Llorente, who left the club in the summer. More names will undoubtedly come up until Mourinho fills the void.

Eriksen is definitely leaving the club and Spurs would prefer it to be this month so they can recoup some sort of fee for him rather than lose him for nothing in the summer. The Denmark international has been a wonderful player over the last six seasons but his situation has turned sour. The rejection of a new contract has coincided with an alarming dip in performances, resulting in him being booed against Liverpool at the weekend. After that match he appeared to say goodbye to the fans amid reports of an agreed deal with Inter Milan, but Mourinho has said that he will definitely play against Middlesbrough in the FA Cup on Tuesday.

By winning five of his first seven games in charge, it masked the problems that Mourinho inherited at the club. As it turns out, Mauricio Pochettino may not have been the issue after all as, with the exception of the injuries to Kane and Sissoko, the Portuguese is now battling exactly the same problems and results have waned. Mourinho has a squad with little depth, one that has not been properly refreshed over time and is full of ageing players, contract rebels and under-performers. He has admitted that it could take up to three or four transfer windows to get the squad in the shape he wants it, so Spurs fans should probably not be too optimistic of immediate success.