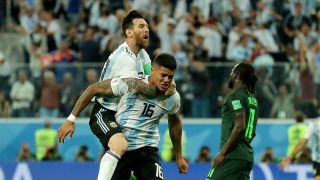 Russia 2018 has arguably given us the most thrilling group stage to any World Cup in recent memory.

From Spain and Portugal's Sochi epic to the in-form hosts and Germany's shock exit, there has so much to enjoy - and that is even before we consider VAR controversies, late, late drama and fair play criteria.

Our reporters are stationed across seven Russian cities and, ahead of the knockout stages, they have the chance to gather their thoughts and pick out some personal highlights.

So, here are the magnificent seven's pick of the best goals, games and fans, as well as the moments that have stood out the most during their time covering the action.

Best goal: Lionel Messi – Nigeria v Argentina. Sublime perfection. Ever Banega's dreamy pass, the touch on the thigh, the cushioning with his left foot, the right-footed finish.
Best match: Nigeria 1 Argentina 2. After Messi and Banega's brilliance, back came "Bad Argentina". Victor Moses equalised from the spot, Nigeria should have won it. Marcos Rojo did.
Best moment: Iran's St Petersburg invasion. Banned from attending football matches in their homeland, Iran's female supporters provided a feel-good story of triumph and defiance.
Best atmosphere: Brazil and Argentina. In the interests of diplomacy, I'm declaring a South American dead heat. Maybe they can sort it out in a St Petersburg semi-final?

Here are my group stage highlights from St Petersburg. and all feature. It's been a good'un. June 29, 2018

Best goal: Aleksandar Kolarov - Serbia v Costa Rica. A trademark free-kick from the left-back and a fitting way to mark the stadium's first World Cup goal.
Best match: Uruguay 3 Russia 0. After Luis Suarez's fine free-kick, Russia's efforts to get around defensive king Diego Godin were akin to banging your head against a brick wall.
Best moment: Colombia fans' reaction to Yerry Mina's winner against Senegal. It was 20,000 yellow-shirted lunatics jumping up and down and waving their scarves. Quite a sight!
Best atmosphere: Senegal v Colombia. Senegal maintained an impressive rhythm throughout the 90 minutes with their drums, while their counterparts were noisy and passionate.

My highlights from the group stages in SamaraJune 28, 2018

Best goal: Toni Kroos - Germany v Sweden. The champions were on the brink of elimination until Marco Reus levelled and Kroos somehow curled a free-kick home deep into added time.
Best match: Portugal 3 Spain 3. Cristiano Ronaldo crowned a hat-trick with a stunning free-kick, while Diego Costa netted twice as Spain made light of Julen Lopetegui's shock departure.
Best moment: Panama's World Cup debut. It was party time for the newcomers despite a 3-0 loss to Belgium. Tears were flowing before, during and after the match.
Best atmosphere: Peru. Staged in Sochi but this felt like a home match in Lima. Peru's strong travelling contingent provided deafening noise throughout the 2-0 win over Australia in front of 44,000 supporters.

Best goal: Luka Modric - Argentina v Croatia. Jesse Lingard against Panama was sublime, but it has to be Modric versus Argentina. A stunning - and hugely important - strike.
Best match: Switzerland 2-2 Costa Rica. Balanced, competitive, great goals, hilarious goals, and bizarre (correct) VAR at the end. Enthralling.
Best moment: Cleopatra the tapir. Predicting Argentina against Croatia and England's clash with Panama, with her duck best friend at her side. Because the World Cup brings everyone together.
Best atmosphere: Argentina v Croatia. A noise to disturb the very surface of the Volga. The South Americans were still loud even after they lost.

It’s the end of the group stage in Nizhny Novgorod. I’ve picked out my highlights. They include a tapir. June 29, 2018

Best goal: Aleksandr Golovin - Russia v Saudi Arabia. A curling free-kick from the edge of the box to cap a 5-0 win and a perfect start for the hosts on opening night.
Best match: Belgium 5 Tunisia 2. Two goals each from Eden Hazard and Romelu Lukaku against a Tunisia side whose attacking approach backfired.
Best moment: Poland fans applauding throughout the Senegal national anthem. The fear of racism in Russia has not materialised and this was a heartwarming moment.
Best atmosphere: Germany v Mexico. The noise and colour from the thousands of Mexicans was incredible and the roar at the final whistle that greeted their victory was ear-splitting.

Best goal: Philippe Coutinho - Brazil v Switzerland. With a trademark curling finish from outside the area to the top corner, Coutinho's effort was easily the best goal scored in Rostov-on-Don.
Best match: South Korea 1 Mexico2. Juan Carlos Osorio's men were particularly easy on the eye and they did not panic when Son Heung-min pulled one back in injury time.
Best moment: Gylfi Sigurdsson's penalty against Croatia. The Rostov Arena erupted as the Everton playmaker offered Iceland hope of progressing, although ultimately it was not to be.
Best atmosphere: Mexico. El Tri's supporters edge out those of Brazil, Uruguay and Iceland as the best heard at the venue during the group stage.

I borrowed Lenin as a backdrop to run through the highlights of the so far in Rostov-on-DonBest goalBest gameBest momentBest atmosphere June 29, 2018