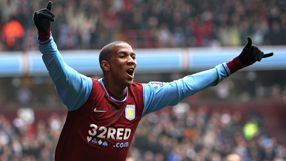 However, the former Watford man is one of three Young brothers attempting to establish themselves as stars of the future.

The 23-year-old has bagged 16 Premier League goals and a plethora of assists for the Villans since his £9.65 million move from Vicarage Road in January 2007.

However, 19-year-old brother Lewis - still at Watford - is beginning to work his way into the Hornets' first-team plans, making three League Cup appearances prior to his Championship debut in the 4-2 home defeat to Bristol City in December.

And the third brother of the Young clan - 12-year-old Kyle - is already making a name for himself in Arsenal's academy.

"He's in the Arsenal academy system and everyone keeps telling us he's the next one off the production line," says Lewis in the April edition of Sky Sports magazine.

Lewis goes on to reveal his admiration for his older sibling's achievements in the top flight – especially as at the age of 16, Ashley failed to earn a full-time scholarship with Watford, but was permitted to train with the squad twice a week while he completed his A-Levels.

"Ashley had little disappointments along the way and he's still made it big," he says. "That is something I can strive towards too. Seeing not just Ashley but other lads who haven't been able to get a scholarship at 16 but have come back to achieve so much, it's great for young players.

"He treats every game like it's just another game and that's what I've always admired. He plays football in the Premier League like he's still playing it in the park with me. He's just enjoying it."

The full interview with both Lewis and Ashley Young is available in the April issue of Sky Sports magazine.