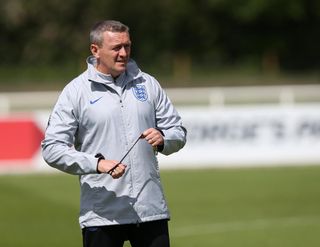 England Under-21 boss Aidy Boothroyd insists his Young Lions have what it takes to win Euro 2019.

The manager named his squad for next month’s tournament in Italy and San Marino on Monday, with 11 of them having previously won a World Cup with England.

Manchester City star Phil Foden, who won the Under-17 World Cup in 2017, makes the squad, along with nine Under-20 world champions, including Dominic Solanke, Kieran Dowell and Jonjoe Kenny.

Wolves midfielder Morgan Gibbs-White, who also won the Under-17 tournament, has been called up for the first time.

England face France, Romania and Croatia in Group C, with their opening game against France on June 18 in Cesena.

Boothroyd said: “This group have also won a lot at youth level and know the work and application that it takes.

“We’ll need that experience and winning mentality for the Euros.  It’s always a really tough tournament and I think this year is as strong as it has ever been.

“It’s a great opportunity for our players to showcase their talents as individuals and as a team.

“This is a really strong squad and I’m really pleased with the group of players I’ve got who will be representing us at the Euros.

“We have a big pool of talent in the England set-up and I had some tough selection decisions to make as there’s a lot of strength in depth.

“We have a real mixture in terms of age and experience.  We’ve got Tammy (Abraham), Demarai (Gray) and Angus (Gunn), who were part of the Euros squad in 2017, but also have nine players who are young enough to be eligible for the next qualifying campaign.

Chelsea’s Abraham, Mason Mount and Fikayo Tomori are also included but will not link up with the squad until after Monday’s Sky Bet Championship play-off final.

Abraham has scored 26 goals on loan at Aston Villa this season, while Mount and Tomori helped Derby to sixth place.

Boss Boothroyd signed a two-year extension to his contract on Friday to take him through to Euro 2021.

He guided the Young Lions to the semi-finals of Euro 2017 in Poland before they were knocked out 4-3 on penalties by Germany after a 2-2 draw.

Boothroyd added: “We are coming up against three really good teams.  France will be a real test, with their athleticism and guile, power and pace.  Romania and Croatia will be different again, with their strength coming from the team as a group.

“They’ll be well-organised, drilled and tough to break down, while looking to counter-attack.  We’ll need different tactical solutions for each game and it’s up to us to get the right balance in our team – soldiers and artists.”