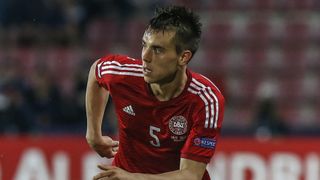 Kasper Schmeichel underlined the importance of family values within the Denmark squad after they paid for Jonas Knudsen to fly home following the birth of his child.

The Ipswich Town defender was an unused substitute for Saturday's 1-0 Group C win over Peru, sealed thanks to Yussuf Poulsen's second-half goal.

As news reached the Denmark camp that Knudsen's daughter had been born three weeks prematurely, captain Simon Kjaer led the calls for his teammate to be allowed to return home.

Although the coaching staff were reportedly not keen on the idea, the squad came up with the money to pay for a private plane to transport Knudsen to Denmark and back in a day, 24 hours after the Peru clash.

"We're footballers but also human beings," Schmeichel told a media conference on Wednesday, ahead of their meeting with Australia in Samara.

"I'm a father myself, I can't imagine how big it must have been for Jonas to get the message but not be there. We wanted to help him, there are lots of fathers in the squad.

"You've got to look beyond football and to the human being, so we'd have done everything so he could go and see his newborn baby."

Christian Eriksen set up the decisive goal against Peru and Schmeichel feels fortunate to count the Tottenham midfielder among his compatriots.

"It goes without saying Christian Eriksen is a world-class player, we're very lucky he's Danish and we're very happy about that," Schmeichel said.

"He's important to the team, we've seen that through qualifying, particularly in the play-offs when scoring a hat-trick, but off the pitch he's a great lad, very down to earth and you wouldn't think he's the world-class player he is. He's of huge importance to this team."

Schmeichel also shrugged off remarks about his country’s relatively meagre following in Russia - and also dodged the question over who Mary, Crown Princess of Denmark will be supporting, considering she was born in Australia.

"You're going to have to ask her that!" he said. "Some teams have a huge backing, Peru had a huge backing but it doesn't make a difference to us.

"We've played in different leagues all over the world with little to no fans on your side, it's 11 men versus 11 men on the pitch.

"If you see the people celebrating back home we have a lot of backing. We have families, some tried to get to Russia but didn't get to make it but we're happy for those that come."