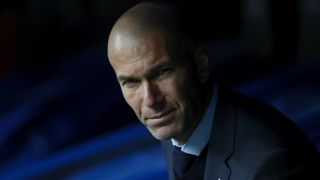 Former Real Madrid captain Fernando Hierro leapt to the defence of Zinedine Zidane, urging the club to be sensible as pressure builds on the under-fire head coach amid their struggles.

However, Madrid have been less than convincing this term despite winning the UEFA Super Cup, Club World Cup and Supercopa de Espana – already 16 points behind runaway leaders and bitter rivals Barcelona in LaLiga.

Madrid also stumbled into the quarter-finals of the Copa del Rey following a disappointing 2-2 draw at home to Numancia on Wednesday but Hierro has called for calm in the Spanish capital.

"We have to be sensible," Hierro told EFE.

"We are in January and it is the same coach and almost the same players who won eight titles in the last two years.

"Real Madrid means that you have to win every game, being second is not worth it.

"However, we have to be calm and use good sense.

"One gets used to winning everything, but when that isn't the case, it's not a good enough reason to want him out."

"We have to be smart in our judgement because they are the same players, the same trainer and the same philosophy," he added.