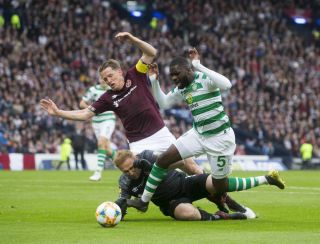 Hearts goalkeeper Zdenek Zlamal insists he did not touch Odsonne Edouard before the Frenchman went down to win the penalty that proved the turning point in the William Hill Scottish Cup final.

Zlamal was penalised by referee Willie Collum for bringing the Celtic striker down and Edouard squeezed home the spot-kick to cancel out Ryan Edwards’ opener.

Edouard went on to slot home the winner in the 82nd minute and clinch the treble treble for Celtic to leave Hearts dejected after a battling display.

Zlamal said: “For me it’s absolutely not a penalty. I’m 100 per cent sure that I didn’t touch him. But the referee said penalty.

“It’s very disappointing as well because I touched the ball, but it went in. It was the most important reason why we didn’t beat Celtic.

“I think we played very well the whole game but football is about small details and Celtic were more lucky. It was a big opportunity and we felt that we should win, but I have to repeat it wasn’t a penalty.