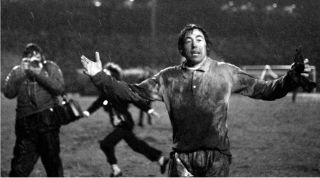 If you’ve got time to check out the 1971/72 edition of the Oxford English Dictionary before 7.45pm on Tuesday evening, then flick to B and the word ‘bonkers’.

Staring back at you will (surely) be the words ‘League Cup semi-final – Stoke City vs West Ham’. There might be some accompanying pictures of Stoke players taking on celebratory fluids in the post-match bath, and a familiar-looking figure between the West Ham posts shortly before an epic tie reached its extraordinary denouement after a breathless and barking-mad 420 minutes of football.

World Cup-winning team-mates Bobby Moore and Gordon Banks may have been, but in the second replay on neutral soil – which followed two regulation legs in the Potteries and London’s East End – the former showed a disbelieving crowd that he'd learned a thing or two from Banks by going in goal for 20 minutes while Bobby Ferguson received treatment for an injury in the bowels of Stoke’s famous old ground.

By the time Moore assumed his temporary role, however, these two sides were sick of the sight of each other.

It certainly did. With almost 50,000 crammed into Manchester United's home – it could have been more were it not for the ongoing construction of Old Trafford’s cantilever stand – these two clubs played out the final act of a compelling drama which, arguably, represented the finest domestic cup semi-final ever played on these shores.

That match in the north-west took place on January 29, 1972 – a full 49 days after Tony Waddington and Ron Greenwood’s sides first met at the Victoria Ground in front of 36,000 fans scenting a Wembley jaunt in a tournament just 11 years old.

West Ham won the first match of a ding-dong tie 2-1, with a penalty from Geoff Hurst and another goal from Clyde Best cancelling out a strike from Stoke’s experienced skipper Peter Dobing, a player who had famously gone on strike over a contract dispute five seasons previously.

Perched in the Victoria Ground press box was Gerry Harrison of The Times and he, like a great many others, was in no doubt that the Potters had spurned a golden opportunity.

“A West Ham United display of character and skills looks to have earned an all-London League Cup final in March,” he wrote. “A goal down early on in this first leg of the semi-final round, they fought their way into a position of comfortable superiority long before the end.”

With just 10 days to go before Christmas, Stoke’s fans travelled south knowing that festive cheer might be extremely thin on the ground for the journey home. Greenhoff, though, says that there was a steely resolve on the team bus as Waddington’s side prepared for a match that came to define the manager’s 17-year reign in the Potteries.

“On the bus going to Upton Park I had never known it so quiet,” he says. “The people were just focusing on the game. It was a great West Ham side but we knew that if we played well we had the beating of anyone – that’s just the kind of side we had.”

It took 72 minutes of a raucous night at the Boleyn Ground for John Ritchie to silence the locals; his shot from the left-hand side of the area rifled through a packed box and past Ferguson in the West Ham goal. The final twist was delivered with just four minutes remaining as Banks pulled off a stunning save from a Hurst penalty to take the tie to a replay.

Banks was again the hero at Hillsborough in the third titanic clash between the pair and, it seems, the nation was starting to rather enjoy a tussle that few wanted to end.

“What we said of this encounter before it began we may say again: that Wembley will be graced by the winners and yet be the poorer for the absence of the losers,” wrote Brian James in The Times. “These teams have played already not merely three matches, but one great episode in the League Cup’s story.”

The fact remained that after over five hours of action, there remained but a '70s fag paper between them. As it was, Lady Luck was about to shine on Stoke as the two sides headed to Old Trafford.

“If you’ve only got 10 men on the pitch then I'd have thought that Bobby Moore was the one man you'd want in his best position,” says Greenhoff. “It seemed incredible that he ended up in goal.”

Moore’s stint lasted just 20 minutes but, unfortunately for the Hammers, coincided with a penalty for the Potters. In keeping with the magic of the tie he saved the original spot-kick before helplessly watching the original taker, Mike Bernard, tuck home the rebound.

“He went down like a sack of potatoes,” laughs Greenhoff. “He was very deceptive in goal – he was a lot slower than he looked.”

The game, in contrast, was about to unravel at a furious pace. Goals by Billy Bonds and Brooking put the final within West Ham’s reach before George Eastham – described by the Daily Mail’s Jeff Powell as “that incredible veteran who will go to Wembley with all soccer’s blessing” – crossed for Dobing to sweep home.

Terry Conroy, who had been involved in the initial clash with Ferguson, then shot beneath the goalkeeper’s body to put Stoke in dreamland just four minutes after the interval. Mercifully for the players it proved to be the final goal of the tie, as the two sides traded blows until both were barely standing.

“There was an over-riding feeling of relief – a real 'thank god that’s over' feeling when that whistle blew,” says Greenhoff.

It was perhaps Powell who best summed it up. “This last act of a seven-hour semi-final was so full of flashpoint drama and raw courage that even Moore saving a spot-kick seemed scarcely out of the ordinary,” he wrote.

Stoke went on to beat Chelsea in the 1972 final, goals from Conroy and 'that incredible veteran' Eastham sandwiching Peter Osgood's equaliser on the stroke of half-time.

Now, as the Potters prepare to tackle another mountainous task in another huge League Cup semi-final, their fans will hope that history repeats itself – albeit in a slightly abridged format.