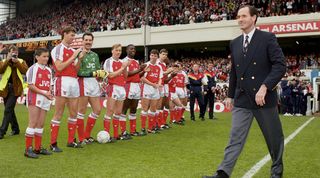 Football’s history is full of reminders that the margin between glory and despair can be very slender. So too, can the line between ordinary success and the truly sensational.

Take Arsenal’s league campaign of 1990/91. The Gunners were crowned league champions, their striker Alan Smith was the top flight’s leading goalscorer, and the back four conceded a mere 18 league goals, keeping 23 clean sheets. What’s not to bask in? On paper, this hardly looks the sort of season a club would look back on and think ‘if only’. Yet one detail niggled: the team had lost just one match, leaving them excruciatingly close to an unbeaten league campaign – an accomplishment that had not been managed since Preston achieved the feat 102 years previously.

That single defeat came at Stamford Bridge in February 1991. Chelsea’s gaff was then a somewhat beastly, uncongenial place to visit, particularly in the arse end of winter. Although the Gunners were unbeaten in 26 league matches, a run that stretched back to the end of the previous campaign, there were some dodgy omens. The high-scoring wins of earlier in the season had begun to dry up: their previous three results were a brace of 1-0 wins and a goalless draw, and the club hadn't won at Stamford Bridge since 1974.

If a winning run is going to end, a derby is a likely occasion. This match hinged on the fact that Steve Bould was forced off through injury at half-time. Bould was then the marshal of Arsenal's defence, since customary bedrock Tony Adams was busy serving a four-month jail sentence for drink driving. Bould’s early bath, and the fact he was replaced by rookie young midfielder David Hillier, seemed to turn the tide. As former Gunner Perry Groves, who played in the match, tells FFT with a smile: “That was the moment – we all blame Bouldie for the fact we didn’t go invincible!”

When a horribly misplaced header from Nigel Winterburn allowed Graham Stuart to pounce and score, it was little surprise.

By the time Chelsea doubled the lead, Arsenal’s patched-together defence seemed like bewildered, exhausted prey that was prime to be put out of its misery. Winterburn, perhaps attempting to atone for his earlier error, strayed hellishly out of position, allowing Kerry Dixon to slot home with pathetic ease. Two minutes into injury time, Smith pulled back a solace strike for the guests but the unbeaten run was over.

While Chelsea won the battle on the day, it was Arsenal who won the war come May by being crowned champions for the second time in three years. At that stage, says Groves, the fact they so narrowly missed out on an unbeaten league campaign didn't rankle. “We’d never thought for a moment we could go through a whole season unbeaten – we never thought anyone could do that,” he says. “But then Arsenal did go and do it in 2003/04. When I watched that, I thought: ‘We very nearly did that!’”

Very nearly indeed – Graham’s reign was a time of glory for Arsenal, glory that has perhaps been unfairly tarnished and almost forgotten by some. In his nine years in charge of the club, the Scot guided the Gunners to six major trophies including two league titles, the European Cup Winners’ Cup and a then-unprecedented domestic cup double. Ordinarily this would be enough to cement him as an icon, but much that has happened since those momentous campaigns has clouded the picture.

The Scot lost his job in 1995 after a Premier League inquiry ruled that he had received bungs totalling more than £400,000 from the purchases of John Jensen and Pal Lydersen. By that stage he had turned the team into such a dour, graceless beast that some Gooners had lost faith in him regardless of any financial skulduggery. His subsequent embittered soundbites and eventual instalment as manager of hated rivals Tottenham further only deepened the animosity. All of that muddied how Graham was regarded, but what really hastened the amnesia over his achievements was the arrival of Arsene Wenger. The Frenchman not only won trophies galore, he tore up Graham’s defensive rule book and prioritised artistic and flowing football. Soon, many Arsenal fans were regarding Graham not as a club legend but an embarrassing artefact from an unsophisticated past.

Groves affirms he deserved better. “He should be more revered,” says his former charge. “Wenger’s achievements for the club cannot be questioned, but if George hadn't laid the foundations, he wouldn’t have been able to do any of it. When George arrived, Arsenal were on a par with how Newcastle United are now – a big, but underachieving club. It was George who sorted out the team, and brought the pride and the trophies back. Wenger then built on the foundations he'd put in place.”

Nowhere are the relative achievements of Graham and Wenger clearer than in the 1990/91 and 2003/04 seasons. Just as Graham’s team were one Kerry Dixon goal at Stamford Bridge away from an unbeaten campaign, so did Wenger’s invincible side come within a whisker of losing their unbeaten run at Old Trafford. In the last minute of that terrifically tetchy tie, Ruud van Nistelrooy smashed a controversially awarded penalty against the crossbar, and the battle – and boy was it a battle – ended goalless.

Just those two turns of fate stopped Gunners geeks from being able to say: “Wenger’s double-winning squads are all very well but they will never equal the glory of Graham’s invincibles.” Not that Groves is complaining. “I’m still a massive Gooner so if anyone was going to do it I wanted it to be Arsenal,” he says.