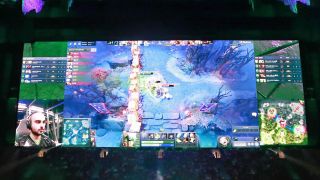 An eSports demonstration has taken place at the Asian Games ahead of competitive video gaming being included as a medal event in four years' time.

The rapidly growing concept of eSports debuted at a major multi-sport event for the first time on Sunday in Jakarta.

Six video-game titles are being played, including Arena of Valor, League of Legends and Pro Evolution Soccer.

The IOC has previously said it will explore the possibility of including eSports in future Olympic Games.

From today, six video games titles will be competing at Britama Arena, Jakarta. Are you watching it right now? August 26, 2018