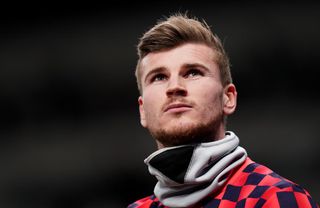 Werner is one of Europe's most coveted strikers having made a big impact for Leipzig this season as they chase their first Bundesliga title.

The German has netted 27 times, as well as providing 12 assists, in all competitions so far this season - making him one of the most lethal forwards around.

Liverpool are widely reported to be favourites in the race to sign Werner, but the Champions League holders will face competition from their Premier League rivals.

According to Sport1, both Chelsea and Manchester United are still very much in the race for the 23-yeard-old.

The report states that, along with the Reds, the duo remain 'hot candidates' and will give Werner a tough decision to make come summer.

Werner has already spoken publicly about the dilemma he could face with so many teams vying for his signature.

He told Sky Sports: "At this time in professional soccer there are two different variations. The first is to be part of a team like Liverpool or Manchester City. They have a good working team. The teams have also great coaches.

"But this is the question: do you want to go to that kind of team, because the situation is already that hard for each member and you want to be a part of it? That's one point you have to look at.

"The other side are teams which need some big changes, because they just won a few big titles, but they are not able to compete on the highest level anymore. For me Manchester United is one of these teams.

"So at this point of my career I'm asking myself: do I want to be part of a new team, to build up something new, or do I want to stay at my team and make something great?"

Werner is believed to have a release clause in his contract worth a little over €50m (£45m) which, for a player of his prolific output, is certainly very affordable.

Chelsea are hoping they can convince Werner to be part of Frank Lampard's project at Stamford Bridge but could turn to Lyon's Moussa Dembele if they fail.

Meanwhile, Man United are keen to make a statement in the market by signing a top striker and since Erling Haaland slipped through their fingers, Werner appears to be next in line.