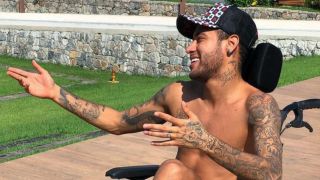 Neymar has drawn criticism for a seemingly ill-judged social media tribute to the late Stephen Hawking.

World renowned physicist Hawking died at his home in Cambridge on Wednesday, prompting an outpouring of affection.

At 22, Hawking was diagnosed with a rare form of motor neurone disease, the illness leaving him confined to a wheelchair and needing a voice synthesiser to speak.

Paris Saint-Germain and Brazil forward Neymar is recovering from a broken metatarsal in a bid to take part in his country's World Cup campaign.

He tweeted: "You have to have a positive attitude and get the best out of the situation you are in. Stephen Hawking"

The post was accompanied by a picture of Neymar gesturing happily in a wheelchair, with his foot in a surgical boot.

Many Twitter users responded, stating they felt the 26-year-old appearing to equate his struggle with an injury that will hinder him for a matter of weeks to Hawking's half-century battle against a severely debilitating condition was in poor taste.