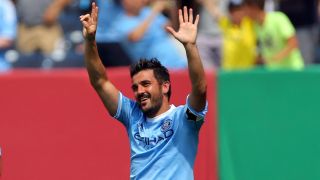 New York City have confirmed captain David Villa will leave the club when his contract expires at the end of the year.

Spain's record goalscorer and part of the squads that won Euro 2008 and the 2010 World Cup, Villa became City's first signing when he joined from Atletico Madrid in June 2014.

He went on to score 80 goals in 124 Major League Soccer appearances, becoming a hugely popular figure in New York in the process and earning a Spain recall in 2017 – three years after his previous appearance at international level.

"My experience here was amazing," said the 36-year-old Villa, who has been linked with a move to Japan and will announce his next playing destination "in the coming days".

"It gave me everything as a soccer player, as a person, and as a family man. I'll always remember this experience with love. My heart is here and I'm an NYCFC supporter forever."

Paying tribute to the 2016 MLS MVP, New York City sporting director Claudio Reyna added: "David has been an incredible ambassador and captain to this club since the moment we signed him. His professionalism and leadership helped us through the challenges that a new team faces when they come into the league.

"He's represented New York City FC tremendously both on and off the pitch and has been a real leader for this football club.

"I truly believe that David will be remembered as one of the best players to ever play in MLS. He will forever be a legend amongst all of our wonderful supporters and everyone here at NYCFC wishes David nothing but the best in the remainder of his career. He will always be a part of NYCFC."

While Villa is leaving MLS, another former World Cup winner, Bastian Schweinsteiger, has confirmed he will spend a third season as a designated player with Chicago Fire.

"Let's raise a trophy," said Schweinsteiger. "I believe in this club and I believe that we can be champions."