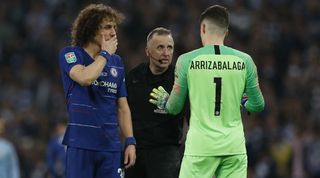 Chelsea keeper Kepa Arrizabalaga and gaffer Maurizio Sarri had a "misunderstanding" over an eventually-abandoned substitution during the Blues' League Cup final defeat this weekend, with the shot-stopper getting his own way and staying on the pitch for the ensuing penalty shootout.

While few player-manager disagreements are witnessed in such high-profile circumstances, there are plenty from years gone made clear for the world to see. FourFourTwo takes a look at 10 of the best...

The 2010 World Cup was an unmitigated disaster for France coach Raymond Domenech, with les Bleus crashing out in the group stage. Tensions had simmered in the tournament's build-up, with players grumbling about their boss’s superstitions and lack of man-management, and outspoken striker Nicolas Anelka had already warned Domenech that the mood in the camp was poor.

Following a dour 0-0 draw with Uruguay in their opening match, France then capitulated against Mexico, losing 2-1; Anelka was replaced at half-time for calling the eccentric coach a “son of a whore” after being told he’d strayed out of position. He was subsequently sent home after refusing to apologise, but it’s safe to say the former striker doesn’t regret his outburst.

“I insulted a coach who the whole of France had already insulted, a coach who had never won anything apart from Ligue 2 and the Toulon tournament,” he raged. “When you have been coached by [Carlo] Ancelotti and other greats, it's hard to be coached by Domenech.” Wisely, Domenech pledged to “avoid several France players in the future”.

“He doesn’t know the meaning of the word loyalty,” said Keane of his former boss after the publication of Alex Ferguson: My Autobiography in 2013. The retired Manchester United manager spilled the beans on his ex-skipper’s controversial departure from Old Trafford in 2006, when Fergie admitted to having been alarmed by Keane’s ferocity during a set-to over the Irishman’s criticism of team-mates on MUTV following a match against Middlesbrough.

“What I noticed about him… was that his eyes started to narrow, almost to wee black beads. It was frightening to watch, and I’m from Glasgow,” Ferguson wrote.

“I don’t see why he needed to say all those things, given the fact we’d won so much for him at United,” countered Keane, referring to David Beckham and Ruud van Nistelrooy as well as himself.

"I was in great form," blasted Argentine midfielder Fernando Redondo, "but he had particular ideas about discipline and wanted me to have my hair cut. I didn't see what that had to do with playing football so I said no again."

The ‘he’ in question was national team coach Daniel Passarella, whose puritanical clampdown included banning players with flowing locks and earrings from his squad. The argument became so vitriolic – Redondo missed out on the 1998 World Cup – that even Diego Maradona and president Carlos Menem got involved.

Although Redondo was later recalled by Marcelo Bielsa, the Real Madrid man retired from international duty after just two further caps, preferring to “concentrate on club football”. As for Passarella, Redondo jibed: “I’d cross the street to avoid him.”

Midway through his first season at Arsenal, manager Graham described Limpar as “the most in-form player in the country”. The Gunners won the title in 1990/91 despite the maverick Swedish winger’s form tailing off, but Limpar was never the same player thereafter and spent the next few years flitting between the first team, substitutes’ bench and reserves.

He was then sold to Everton in 1994, with player and manager barely on speaking terms. Limpar later likened life under Graham at Highbury to “living in Saddam Hussein’s Iraq… I was a prisoner”. Wisely, he tries to avoid his ex-boss whenever they attend Arsenal functions these days.

Gullit should have known better than to take on Newcastle's favourite son, but he did – and sure enough, the fireworks followed. The Dutchman had the stones to drop Wor Al for an early-season derby clash with Sunderland in August 1999, fielding young striker Paul Robinson instead.

It backfired: Newcastle lost 2-1 – one of six miserable defeats from their first seven matches of the campaign – and Gullit resigned three days later. "I told him to his face he was the most overrated player I have ever seen," he later said of Shearer, who went on to score 23 goals that season and later became the Premier League's record goalscorer. "I still think I made the right decision," Gullit told FFT in 2006. We're not so sure.

“You’ll never be a good professional, MacDonald,” barked recently appointed Newcastle boss Gordon Lee at his star striker after the forthright goal-getter had made it known that he wouldn’t have chosen Lee as Joe Harvey’s replacement in the dugout.

When ‘Supermac’ refused to practise throw-ins during a “boring and clueless” training session, a line was drawn in the sand, and Lee sold him to Arsenal at the end of his first season in charge. The duo have consciously ignored each other ever since.

Sprake had long departed Elland Road when he spoke to the Daily Mirror’s Richard Stott in 1977 about former Leeds supremo Revie’s alleged bribery of opponents while he was in charge of the Yorkshire club. Alan Ball and Frank McLintock also claimed that the former England chief offered opponents ‘sweeteners’ to take it easy during clashes with Leeds, but Sprake remains the only ex-Revie player to speak out against him.

His team-mates’ loyalty was with their manager, though. “To Don and all of us, Gary immediately became a pariah and we wanted nothing more to do with him after he spoke to the press,” one anonymous player asserted.

Mourinho's final season at Real Madrid was full of bad blood. The Portuguese was at loggerheads with several influential players in the Blancos dressing room, and none more so than decorated goalkeeper Casillas – an all-time club legend of five Liga titles and three Champions League winners' medals.

Things turned sour after a dominant 2011/12 campaign where Real Madrid had scooped the league title with a record 100 points. Casillas started the following campaign but was demoted to the bench in favour of youngster Antonio Adan for a December clash with Malaga. A fractured hand two weeks later came at a terrible time: Mourinho signed Diego Lopez to replace 'San Iker', and he never regained his place even when fit again.

"Our relationship started to fall apart when the team wasn't playing well," the Spaniard, who joined Porto on a free transfer in 2015, later recalled. "When you spend so long in the same team, people start to get bored of you."

“Tommy Docherty lied to me,” claimed Manchester United legend George Best, “and I wouldn’t trust him as far as I could throw him.”

With the Old Trafford club in dire straits back in the winter of 1974, manager Docherty struck a deal with the maverick Irishman. “[As long as] you give your all when you train and make up the time later,” the Scot informed him, “it doesn’t matter if you miss the occasional training session.”

Best took him up on his offer, failing to report for duty after a night on the sauce a few days before an FA Cup tie with Plymouth, but was then promptly dropped despite turning up at Old Trafford at Saturday lunchtime for the game. The Northern Irishman continued to criticise Docherty – usually in colourful language – in his after-dinner appearances in the years that followed.

“I was very upset about what happened at Manchester City,” said winger Peter Barnes. “I thought that I was going to be part of the club’s future and I was sold.”

When the charismatic Malcolm Allison returned to Maine Road in the late 1970s, he insisted he was “looking forward to working with a group of homegrown players”. Yet two of those – the popular duo Peter Barnes and Gary Owen – were flogged to West Brom during the 1979/80 season to fund the purchase of Wolves midfielder Steve Daley for a British record fee of £1.4 million.

It was a disastrous signing, and Barnes accused Allison and chairman Peter Swales of “ripping out City’s heart… I had no time for the management of the club after that.” Allison left Maine Road a few months later, blaming Swales for the whole sorry episode.