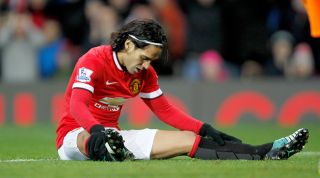 He wasn't the first person to fall out with George Graham or Glenn Hoddle, but Rebrov's failure to see eye-to-eye with successive Tottenham managers scuppered his chances of a successful career in N17.

A distinctly modest return of 10 goals in 59 league matches (and an underwhelming loan spell with Fenerbahce) was positively prolific compared with his two-goal haul in 33 games for West Ham. Little wonder the diminutive Ukrainian couldn't wait to hot-foot it back to Dynamo Kiev in 2005, the club he's successfully managed since 2014.

Where are they now? Brazil's 2002 World Cup winners

Having played a key role in Brazil’s 2002 World Cup-winning squad, Kleberson arrived at Old Trafford in 2003 to the sound of Alex Ferguson claiming he could become a "true United great".

It never quite worked out for the former Atletico Paranaense man, though, with Kleberson later conceding that he never got to grips with the pace of English football. He left United for Besiktas in 2005, returned to Brazil for almost six years, then hopped over to the USA for spells with Philadelphia Union, Indy Eleven and Fort Lauderdale Strikers. He's now the Union's academy manager.

Personally gift-wrapped and delivered by owner Roman Abramovich, Shevchenko’s £30 million signing in 2006 – then an English record – was supposed to be a present for Chelsea manager Jose Mourinho. Instead the former Dynamo Kiev and Milan goal-getter was a total flop at Stamford Bridge, netting only nine times in 47 Premier League outings.

"Not for one second did I fit in with Chelsea's style," admitted the Ukrainian, who re-joined Milan on loan for the 2008/09 season and then ended his career at first club Kiev.

After excelling for his country at Euro 92 and the World Cup two years later, Brolin's arrival at Leeds in 1995 even made the dour Howard Wilkinson break into a smile of satisfaction.

Yet it all went horribly wrong. Injuries and poor form scuppered his progress, as Brolin piled on the pounds and failed to make any sort of impression at Elland Road.

Then followed a wretched spell at Crystal Palace. Overweight yet somehow in the Eagles' side for the final half of 1997/98 thanks to injuries, he played 13 games as the south-east Londoners were relegated and duly left to play one more match in his career for Swedish side Hudiksvalls A.B.K. As a goalkeeper.

Having made it to the play-off round of the Champions League qualifiers, Everton's signing of midfielder Van der Meyde – who'd shone for the Netherlands at Euro 2004 – appeared to herald the dawning of an exciting new era at Goodison Park.

But just as the Toffees fell at the first hurdle in Europe, the ex-Ajax and Inter midfielder failed to live up to expectations on Merseyside. After just 20 appearances and four miserable years, he was released in 2009. "I left my family and my kids because they weren't in England and I fell in love with somebody else," Van der Meyde later told the BBC, discussing his subsequent troubles with drink and drugs.

“He’s a f**king great player,” Sir Alex Ferguson politely informed a group of journalists who'd dared to question Veron's ability to adapt to the English game. "And youse are all f**king idiots."

The hacks had a point, though: the Argentine struggled to fit in at Old Trafford following his big-money move from Lazio, despite occasional flashes of genius. His stint at Chelsea was even worse: Veron played just 14 games in all competitions before heading back to Italy in 2004.

Bogarde had previously shone for the likes of Milan and Ajax, and looked like an excellent signing when he arrived in west London in 2000. But after Claudio Ranieri replaced Gianluca Vialli as manager at Stamford Bridge, the Dutchman found himself sidelined.

In a 2015 interview with the Guardian, Bogarde insisted that Chelsea's hard-ball tactics prevented him from joining another club on loan. “A club could not pay my whole salary, they could maybe pay 70%,” he said. “They asked Chelsea to pay the other 30%, and they said: ‘No. If you want to take him it’s going to be 100% or nothing. He is going nowhere.’

“Of course [I would have taken that cut]. For a player, for me, it’s terrible not to play. Yet I had to return for training.”

Instead, the defender clung on to his hefty £40,000-per-week salary and barely played. When his four-year deal eventually expired, Bogarde promptly retired.

Marlet's form after signing for Fulham in 2001 was so atrocious that owner Mohamed Al-Fayed attempted to sue manager Jean Tigana (who was once, briefly, Marlet's agent) for acquiring him in the first place. The charges were later dropped.

The Spanish hitman plundered goals for fun at Valencia – 81 in 141 matches, to be precise – prompting Tottenham to invest a large chunk of the money (around £26 million) they generated from the sale of Gareth Bale in the striker.

But despite netting the winner against Crystal Palace on his debut, Soldado's form soon petered out and within two years he was back in La Liga.

By the standards of any striker, four goals in 29 games is a paltry return. Factor in an estimated £285,000-per-week salary and Falcao's time at Old Trafford can only be described as calamitous.

A subsequent loan spell at Chelsea, comprising one strike in 10 outings, was an even further cry from his goal-laden exploits with Atletico Madrid.

The craziest season in English football - when the champions went down, and ‘Lucky Arsenal’ annoyed the nation

What's the point of handing in a transfer request? FourFourTwo investigates...

If Birmingham fans hoped that Tarantini could make a similarly impressive splash at St Andrew's as compatriots Ossie Ardiles and Ricky Villa at White Hart Lane, they were sadly mistaken.

Following a whopping £295,000 move (this was in 1978), the former Boca Juniors man failed to impress in the First Division, memorably losing the plot with Manchester United defender Brian Greenhoff during a match between the two sides. When the Argentine waded into the Birmingham crowd to have it out with a heckler, it was clear there was no way back.