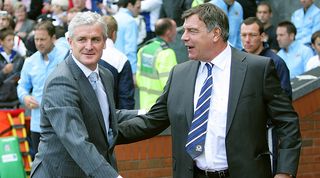 For a few months, they were separated by 13 miles. Oh, and three decades. East Midlands rivals were managed by European Cup-winning players: Derby’s Frank Lampard, a 2012 champion, and Nottingham Forest’s Martin O’Neill, triumphant in 1979 and 1980. The sense that a new father and man of pensioner age were on different trajectories is amplified by departures: O’Neill’s sacking after a sorry homecoming by a club he graced, and Lampard’s confirmed return to Chelsea, where he remains their record goalscorer.

It highlighted a broader trend. The ageing British manager, increasingly, is unemployed. O’Neill joins Tony Pulis, Sam Allardyce, Harry Redknapp, David Moyes, Alan Pardew, Alan Curbishley, Steve McClaren and Ian Holloway among those who have gone from ubiquitous to unwanted. They have been squeezed out by a pincer movement of their old nemesis, the foreigner, and a newer phenomenon, the younger Brit.

Because it turns out that the English are not an endangered species in the dugout after all. When Chelsea appoint Lampard, there will be seven locals managing in the Premier League. Yet in this generation game, only Roy Hodgson is over 51. Go down a division and there are more forty-something managers called Jones (Stoke’s Nathan and Luton’s Graeme) than British bosses over 60 in the Championship.

Perhaps only three of the old guard remain in the top two leagues: Hodgson, who has always been separated from the rest by his cosmopolitan career, the ever-amiable Steve Bruce and Neil Warnock, who may still be winning promotions at the age of 103.

They find themselves outnumbered; not just by imports, but by their juniors. Lengthy managerial CVs seem to count for less. Playing careers seem to matter more. There may be some method to that madness: Lampard has never been part of a coaching double act with Phil Brown, but he has played for five Champions-League winning managers in Jose Mourinho, Carlo Ancelotti, Roberto Di Matteo, Rafa Benitez and Fabio Capello, plus a World Cup winner in Luiz Felipe Scolari. He may be a rookie but he has had an elite education. He brings stardust and a history of operating at the highest level. He potentially offers a different skill set to a reductive focus on clean sheets and set-pieces. Look at the potential influences on Steven Gerrard, Scott Parker and Jonathan Woodgate and, while none boasts much of a track record, it is easy to imagine something has rubbed off on them.

Among the career coaches, Graham Potter offers an injection of ideas; he has not trapped himself in a straitjacket. His Swansea successor Steve Cooper, another leftfield choice, is further proof that clubs are looking beyond the usual suspects.

Meanwhile, Moyes’s contract at Manchester United was due to end on Sunday. If his fate there, like Hodgson’s at Liverpool, suggests that the skills required to manage further down the division are not necessarily qualifications for superclubs, the bigger problem for the hardy perennials is they are being squeezed out of their usual domain: the bottom half of the Premier League and the Championship.

FEATURE David Moyes at Everton: a lost legacy underneath the glass ceiling

The willingness of arrivals from overseas to take unglamorous jobs is one factor – if Southampton can get Ralph Hasenhuttl, why would they want Hughes? – but another is that the supposed safe pairs of hands look less reliable.

With notable exceptions like Hodgson and, despite Cardiff’s swift return to the Championship, Warnock, it has been a terrible couple of years for the ageing Brits. Some, like O’Neill and Pulis, have lost two jobs. Their reputation as guarantees against relegation has been damaged. West Bromwich Albion’s Pulis-Pardew orchestrated demotion in 2018 was doubly bad. Hughes stumbled from Stoke to Southampton, getting relegation results wherever he went. Moyes, admittedly, did a decent job at West Ham but Allardyce proved tone-deaf and unpopular at Everton.

Go down a division and the notion that top-flight experience was essential has been dented. O’Neill and Pulis missed out on the play-offs while Dean Smith and Chris Wilder, newer graduates from the lower-league school of hard knocks, went up. Imports such as Daniel Farke, David Wagner and Nuno Espirito Santo prove anecdotes about getting pissed with Peter Reid are not a prerequisite for winning promotion. Curbishley has stopped being priced at 16/1 for every vacancy apart from leader of the Conservative Party (where he may be preferable to some of the actual candidates).

They will have to compete more to get the kind of jobs they would once have turned down. Their plight may bring little sympathy. Most actually have fine track records, but some overstayed their welcome and the game has been good to all. Hughes’s £6 million pay-off enables him to afford multiple satellite television subscriptions; he can moan about referees in about five televised games simultaneously.

The chances are that he, like some others, will not resurface, which could leave a vacancy as the voice of the older Brits. Lampard is bound for Stamford Bridge, but someone may argue that he and his ilk have been unfairly overlooked. Perhaps the mantle will fall to Sean Dyche; perhaps he could claim that if only his name was Anseanio Dychio, Juventus would come calling. But the most receptive audience may not be his peers; instead, a group of former managers.

5 things I want from Arsenal this summer