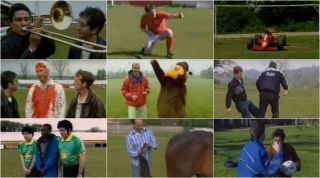 Baddiel and Skinner’s Fantasy Football League recreated many a famous footballing moment during their long-running Phoenix From The Flames regulars. FourFourTwo spends an arduous afternoon re-watching them all to pick out the very best...

Behold, it’s one of the greatest players of all time, and for some reason he’s playing a trombone.

Eusebio takes time out from band practice and his penchant for poo jokes to recreate his four goals against North Korea at the 1966 World Cup by dribbling past six-year-olds.

2) Baddiel and Skinner get kicked up in the air

Tommy Gemmell may be best known for scoring in Celtic's European Cup final victory over Inter, but here he recreates an incident from a game against Hamburg in 1969, when he was tripped by Helmut Haller and responded by chasing after the German and booting him up the backside. As you do.

"That European Cup final was one of the greatest moments of my career, and the Helmut Haller incident was one of the lowest moments," Gemmell protests when he's made aware which incident Baddiel and Skinner want to focus on. "Well yeah, but it was a lot funnier," Skinner rebuts.

At least it gave Gemmell the chance to boot both Skinner and Baddiel, with the duo later admitting they were genuinely injured during the filming.

3) The greatest free kick of all time

The ideal venue to revisit a memorable World Cup fixture between Brazil and Zaire? The stadium of non-league side Hendon FC, of course.

Fantasy Football flew in Ilunga Mwepu to recreate a classic moment from 1974, when the Zaire international lined up in the defensive wall for a Brazilian free kick, only to inexplicably race towards the ball and launch it to the other end of the field as soon as he heard the referee’s whistle. That's one way to stop Brazil scoring, at least.

Highlights here: Mwepu’s Jimmy Hill anecdotes and a dog being kicked into orbit.

4) Peter Beardsley sings ‘All By Myself’ (horrendously)

One thing’s for sure: Beardo has no future in music. The former England star proved that beyond any doubt during this Phoenix From The Flames episode about the four goals he scored against Aylesbury in a warm-up match for the 1988 European Championship.

England won 7-0 at Buckingham Road on a day when both sides were technically at home. Explaining that their other confidence-boosting warm-up matches were against "Hendon, Hartlepool Under-fives, a blind ladies team and Scotland", Beardsley laments that it didn’t do them much good at the Euros.

“We lost every game,” he says. “It turns out that when we got to the European Championship, we had to play big international teams – no-one from the Beazer Homes League at all.”

All was going well in this episode with Best until Baddiel began cracking jokes about the Northern Irishman as they tried to recreate his cheeky disallowed goal against England in 1971.

Best’s response? A right hook to the face. Bosh.

Obscure television presenters were big in Bulgaria back in 1994, it seems – either that or Yordan Letchkov was simply reading lines handed to him on a script. Would he do that? Well yes, he probably would.

This is a fine recreation of the 1994 World Cup, including a drug-chasing Diego Maradona, a diving Jurgen Klinsmann and then Letchkov celebrating his quarter-final winner against Germany with Uncle Bulgaria from the Wombles.

It’s Euro 96 revisited as Seaman recreates his famous penalty save from Gary McAllister in England’s victory over Scotland (a save McAllister discussed in the June 2016 issue of FourFourTwo).

It was all Uri Geller’s fault of course, and here he and pal Michael Jackson hover over Wembley in a helicopter, before Seaman pins the tail on a donkey. Well, technically a pony.

It’s Sweden versus England in 1989, and Terry Butcher is recreating the moment when he half bled to death in pursuit of a 0-0 draw. The gory days of English football.

Elvis and the Pope turn up, and there’s also some joke about Fantasy Island that you won’t understand unless you were watching TV in the early 1980s.

The recreation ends with Butcher chasing a couple of sweater-wearing Swedish presenters across a pitch (at Hendon again, naturally), before his former England team-mate Hodge is deluged in blood. Nice.

Patrick Battiston may have collected 56 caps for France, but his most famous moment came when he was nearly decapitated by goalkeeper Harald Schumacher during the semi-finals of the 1982 World Cup.

Sadly, the conversation here gets lost in translation to such an extent that Battiston ends up head-butting both Skinner and Baddiel before being mown down by a Ferrari driven by F1 champ Michael Schumacher. There's no show quite like it.