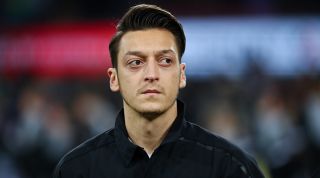 Henrikh Mkhitaryan’s days at Old Trafford are numbered, the Armenia international having struggled since the opening weeks of 2017/18. Ozil would be the ideal replacement: not only does he have experience of the Premier League – with 47 assists from his 134 appearances in the English top flight – he previously thrived under Jose Mourinho at Real Madrid.

Arsenal won’t want to lose the playmaker in the middle of the season, particularly not to a domestic rival, but the Gunners’ hands could be forced by a January bid given that Ozil’s contract expires in the summer.

It won’t be long before South America’s breakout star of 2017 is plying his trade on the other side of the Atlantic, with Barcelona among the clubs linked with a player who’s been likened to Andres Iniesta. A technically gifted midfielder with an eye for a pass, Arthur is also adept at evading opposition pressure and keeping hold of possession in congested areas.

United could do with another option in the centre of the park, particularly if Mourinho continues with the 4-3-3 formation which helps him bring the best out of Paul Pogba. Arthur is still only 21 and would fit the bill.

Left-back has been a problem position for United since Patrice Evra departed for Juventus in 2014. Daley Blind, Luke Shaw, Matteo Darmian and Marcos Rojo have all had a turn, and incumbent Ashley Young has done an admirable job for much of the campaign, but he’s clearly not a suitable long-term candidate for the role.

Napoli’s Faouzi Ghoulam has been linked with the Red Devils, but the Algerian could miss the rest of the season with a knee injury and therefore won’t leave the Stadio San Paolo this month. Closer to home, Bertrand has been one of Southampton’s most reliable performers in the last couple of seasons and would provide more dynamism and attacking thrust on United’s left flank.

Though one of the first big-money signings of the Qatar Sports Investments era at PSG, Lucas’s time in the French capital appears to be coming to a close. The Brazilian wideman hasn’t started a single game in any competition this season, with the summer arrivals of Neymar and Kylian Mbappe pushing him down the Parc des Princes pecking order.

Still only 25, the former Sao Paulo man would have a great deal to offer the Red Devils: namely speed, trickery and an eye for goal. Mourinho was disappointed not to land Inter’s Ivan Perisic in August, but Lucas could make the United manager forget all about the Croatian.

Having been frequently linked with the club back when Louis van Gaal was in charge, De Vrij’s name will be familiar to many United fans. The Lazio centre-half has six months to run on his contract and seems to have little intention of signing a new one, which could open the door for a January move to the Premier League.

De Vrij reads the game well and is intelligent in his positioning, but perhaps his most impressive attribute is his long-range passing from the back. With Eric Bailly and Phil Jones both prone to injuries, Mourinho should consider a move for the former Feyenoord stopper this month.

Kovacic has made just a single start for Madrid in La Liga this season, and that game ended in disaster as Barcelona ran out 3-0 winners at the Bernabeu. The Croatian may have begun 39 matches in all competitions last term, but he’s still very much a deputy to Luka Modric, Casemiro and Toni Kroos.

At 23 years of age, the ex-Inter midfielder won’t be in too much of a rush to secure more regular first-team football, but swapping Madrid for another global superclub in United – and increased playing time – would surely be an attractive proposition.

Left-back may be a more pressing need for United than right-back, but Mourinho would be wise to start the search for a long-term successor to Antonio Valencia, who will turn 33 before the start of next season. Henrichs, who celebrates his 21st birthday next month, is at the other end of his career and would be an astute addition to the Red Devils’ ranks.

Athletic and attack-minded, the highly rated youngster – winner of 2016's Fritz Walter gold medal (handed out to the best U19 in Germany) – has often been left on the bench this term, which could boost United’s chances of prising him away from the BayArena.

Seri was said to be devastated when a proposed switch to Barcelona fell through last summer. But with the Catalans having splurged big money on Philippe Coutinho, United could spy the chance to step in and bring the Ivorian midfielder to Old Trafford – an attractive proposition for the 26-year-old, who is presumably keen to test himself in the Champions League.

Creative central midfielder Seri scored seven goals and provided nine assists as Nice finished third in Ligue 1 in 2016/17. He’s also an excellent ball-carrier and doesn’t shirk his defensive duties, which would no doubt appeal to Mourinho.

Evans’ performances for West Brom in the last two-and-a-half seasons confirm the suspicion that United should never have let him go in the first place. The Northern Irishman is out of contract in June and would be a welcome addition to Mourinho’s centre-back pool, with his combination of traditional defensive skills and ball-playing ability making him ideal for the job.

Manchester City and Arsenal are both seriously interested, and United would be making another mistake if they allowed Evans to join one of their Premier League rivals without at least trying to tempt him back to Old Trafford first.