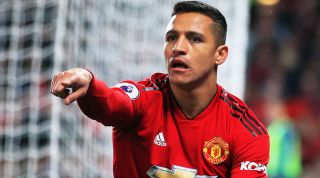 Some players mature like a Merlot in their twilight, receding into midfield to become a deep-lying telepath. Others grow old a little less gracefully, not noticing that their career has gone grey until a winger young enough to be their son has just skinned them. Then there are those who don't give us the satisfaction of noticing the decline either way: the spoilsports, the Zlatans, the money-grabbers, uprooting their young families to MLS to keep the flame burning bright a little longer in weekly testimonials.

This ageing lark agrees with players like James Milner and Tim Cahill, Andres Iniesta and Giorgio Chiellini; those wise beyond their caps and hard to ever remember as younger than 28. But it was never going to be easy when Alexis Sanchez hit 30.

HE WON'T BE WEARING IT, BUT YOU CAN Pick up the new Manchester United 2020/21 home shirt

Sanchez has always been a childlike presence, daring defenders to strip him of possession and knee-sliding in celebration like a page boy at a wedding reception. He's a Premier League action figure: one who possesses the exact ingredients of what makes a footballer fun, and tactically how pretty much how any of us approach a game of FIFA. All we've ever known about the lad is that he never gives up a lost cause, and that he really loves Labradors. It seems obvious in hindsight that an almost-Joey Tribbiani character was destined for a spectacular crash, rather than slowing down gradually.

The last 18 months have been difficult for Alexis. After a flurry of interest from PSG, Chelsea, Juventus, China and Manchester City, the blockbuster move to Manchester United certainly didn't feel like the beginning of the end when he signed. Yet here we are, 18 months later. Sanchez is a lost northern soul with one goal to show for every £8 million or so sent to his PayPal.

He isn't the 25-year-old he once was, but exhaustion has much to blame as time. While his contemporaries have been taking summers off to recharge and flirt with European giants, Alexis competed for Chile in the 2014 World Cup, the following two Copa Americas – winning both – and the 2017 Confederations Cup. It's this diehard attitude that won him more fans than Mesut Ozil; the Chilean's game was always based on his physicality and the ability to be a stride stronger than anyone else. So it seems relevant to ask: why didn't Alexis Sanchez become a full-time striker after he lost his pace?

Strikers generally receive the ball less than wide men. It's more important for a No.9 to have explosive movement than raw pace, especially in the age of the deep block. It's a vital reason why, at 31, Sergio Aguero is still a relevant force for the best side in the land. It's probably also why Pep Guardiola was willing to spend £60m on Sanchez when the chance came about, despite the forthcoming fall from grace.

It's not like Sanchez wasn't capable of being a striker. He is, by statistic, the greatest goalscorer to ever hail from his homeland. A busy false nine type, he managed a goal in 45% of matches he played up top for Arsenal, and just 33% of those where he played to the left of Olivier Giroud. He has always thrived in a set-up built around pace and movement, which is maybe why he never really clicked with Romelu Lukaku. Even without cheetah speed, Sanchez still had the necessary pressing prowess and positioning to find himself netting 20 a season at Manchester City.

The most curious thing of all is that Sanchez differs slightly from a Gareth Bale type. He's power and might and fire, but that's not all there ever was to his game. He touches the ball like his boots are made of velvet.

This is a man who chipped the winning penalty for his country's first international triumph in a century. A man with deftness as well as dynamism. When Sanchez played up front for Chile, he wasn't just the tornado that Arsenal fans witnessed bulldozing through defences: he dropped out of position with reason. He orchestrated. The devil on Sanchez's shoulder wants to take on three centre-backs at once, but the angel is capable of a perfectly weighted through-ball.

Ultimately, it's this juxtaposition of character that led him to this particular fork in the road. A player with all this energy and no idea how to use it. A fireball of a footballer, all burned out.

As Alexis makes his Inter switch permanent and United fans wonder what could have been, it's interesting to think about whether Sanchez could have been an Aguero figure at Old Trafford. He's looked much better since the restart - maybe all he really needed was a much-needed rest and to play in a system that suited his strengths.

Either way, his peak feels like an era ago. But none of us can outrun time. Not even someone as rapid as he was.

MANCHESTER CITY Why Nathan Ake actually is worth £41m