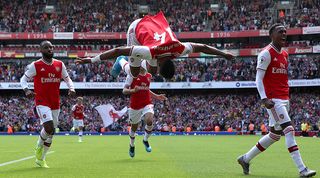 Three games in, it's so far OK for the Gunners: wins over Newcastle and Burnley preceding a predictable – but far from embarrassing – defeat to Champions League winners Liverpool.

This weeekend, however, Unai Emery's side can't afford to slip up against another member of the Big Six: wobbly rivals Tottenham, who went down at home to Newcastle last Sunday. It's already a huge north London derby that could shape each side's starts to the season – and what they do after that.

Here, arseblog picks out some early tit-bits from Arsenal's opening...

1. Front three MUST play against Spurs

So far, the thrilling trio of Pierre-Emerick Aubameyang, Alexandre Lacazette and Nicolas Pepe have yet to start a game together. There are reasons for that, not least because club record signing Pepe arrived late without much of a pre-season, and has been slowly building his fitness. The 90 minutes he played at Anfield will stand him in good stead ahead of Sunday's showdown with Tottenham.

Unai Emery wasn't prepared to play an adventurous game against Liverpool, leaving Lacazette on the bench – much to the France international's displeasure. Most fans could see the need for some caution, but there won't be as much understanding if he chooses not to deploy his best front three against the old enemy in a home derby.

It's time for the Spaniard to play to his team's strengths in attack. It doesn't mean he should ignore other areas of the team, but fans are still looking for a way of identifying with the kind of football he sets out to play – and this would be a big help.

2. Bellerin and Tierney could be transformative

Full-backs play an ever-more important role in the modern game, and in Hector Bellerin and Kieran Tierney, Arsenal have two who could really have a big impact on the way the team plays. Both are making their way back from injury, so realistically it will take them some time to achieve full match sharpness.

But they should be worth the wait: both will significantly increase the team's attacking potency as well as securing their side defensively. With all due respect to Ainsley Maitland-Niles, the inconsistency he shows at right-back isn't inexperience at this point. He's 22 now and has two full seasons of first-team football under his belt. He's just not a natural defender.

On the other side, Nacho Monreal looks like he's on his way to Real Sociedad, while Emery has been reluctant to use Sead Kolasinac in a back four due to worries about his defensive instincts. When Bellerin and Tierney are available, it's easy to see how they'll slot into the team and improve the side.

3. Torreira could help reshape the midfield

The Uruguayan is another who has suffered a slow start to this season after his Copa America duties during the summer. He came on as a substitute against Liverpool, scored a goal and sent Emery a very clear message with his impressive cameo.

Torreira needs to start games now. Arsenal need him: as midfielders are required to be more agile and dynamic than ever, he could reduce the reliance on Granit Xhaka.

The Switzerland international is a decent player, but a considerable chunk of the fanbase have lost faith thanks to some high-profile mistakes – not to mention that his relative slowness will impede a team looking to transition the ball through midfield quickly.

Xhaka’s experience will be needed at times this season with a very young collection of midfield players around him, but Arsenal will benefit hugely if Torreira can stamp his influence on the centre of the park.

4. We’re no closer to Ozil clarity

After a solid and full pre-season, it looked as if Mesut Ozil would hit the ground running when the new campaign got underway. Unfortunately, the situation which threatened his safety – along with that of his family and those of Sead Kolasinac – put paid to that, and he missed the opener at Newcastle.

Illness kept him out of the first home game of the season against Burnley, while last week – despite having recovered fully – he simply wasn't selected by Emery for the trip to Liverpool. It suggests that doubts the Spaniard had over his midfielder persist, and it's unclear exactly what kind of role Ozil will have to play this season.

It's almost surreal that a £350,000-per-week player – not long ago considered the best playmaker in Europe – might be restricted to starts in relatively uncomplicated home fixtures and a more peripheral role away.

Reminding people of his quality when he does play will go some way to forcing himself back into contention, but right now there’s little clarity about this difficult situation.