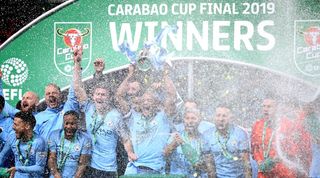 The European Club Association (ECA) has put together plans to revamp Europe’s biggest club competition from 2024.

According to The Sun, the changes would put the League Cup at risk of extinction due to the increased number of fixtures that top clubs would be involved in.

The newspaper says that England’s top six clubs – Manchester City, Liverpool, Chelsea, Tottenham Hotspur, Arsenal and Manchester United – are united in their opposition to the reforms.

The plans are said to include the creation of a third UEFA competition and an increase in the total number of European fixtures per season from 407 matches to 647.

The ECA has backed down on its demands to stage these games over weekends, but that would leave English teams with only two options for League Cup matches: withdraw from the competition or put out a youth team. The fear is that this new plan could see the 59-year-old domestic trophy removed from the English football calendar entirely.

What is being proposed?

The draft plans aim to calm reservations among some of Europe’s biggest football clubs, amid the looming risk of a breakaway European Super League being formed, and the ECA also want to receive the support of smaller countries.

A third-tier European competition would be created below the Champions League and Europa League, and a total of 128 teams would be involved across the three tournaments.

The ECA originally aimed to ring-fence elite European clubs but the proposal was rejected by every club in the Premier League, Serie A and the Bundesliga, 18 of the 20 La Liga sides and every Ligue 1 team except PSG.

How would the new Champions League look?

The biggest change would be in the Champions League group stage, where there would be four groups of eight teams who will play each other home and away for a total of 14 games per team. The top four teams from each group would progress to the last 16, while the fifth-placed side is guaranteed qualification for the following season.

The teams finishing sixth and seventh would have a play-off over two legs to decide who stays in the competition the following season, while the bottom-placed team drops into the Europa League play-off round in the next campaign.

The knockout rounds would go on as normal, but the increased group stage commitments mean that it will take 21 matches to win the competition: 14 group games and seven knockout matches.

How would the new Europa League look?

The group stage would be made up of eight groups of four teams, the same as the current Champions League set-up. However, a crucial difference would be that only the group winners would automatically progress to the last 16 stage. The last 32 stage would be completely removed.

Teams finishing second and third in their group would have a play-off to decide who reaches the last 16 alongside the group winner, while the fourth-placed team is out.

When will a decision be made?

UEFA and the ECA want to agree on a concrete proposal by November in order to put plans in place by 2024. The ECA general assembly is set to meet next month but a Premier League source has told The Sun that English clubs are ready to fight against the proposals.

“This is a sign the biggest clubs recognise the importance of English football as a whole,” they are quoted as saying. “They are not fighting for themselves – they would potentially earn more money from Europe.

“But they know it would damage the Premier League, the EFL, even the National League. It's about helping to keep the whole game alive.”