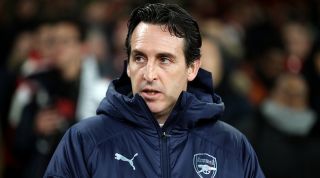 1. Gameplan for top-six away matches

Given recent history, Arsenal have done surprisingly well against the Big Six this season, particularly at the Emirates Stadium. In four home games against Manchester City, Liverpool, Tottenham and Chelsea, the Gunners have gained seven points from a possible 12 with some good overall performances.

But problems still blight Unai Emery’s side away from home. Arsenal lost 3-2 to Chelsea in the second fixture of the season, a game they should have rescued a point from. They definitely should have scooped all three points against a depleted and demoralised Manchester United, but only came away from Old Trafford with a 2-2 draw after some poor defending.

Then there was the 5-1 drubbing at Liverpool last month that seemed all too reminiscent of Arsene Wenger’s reign, suggesting Arsenal’s woes on the road may well be a coaching problem. Consider this – no other top-six team has conceded four goals to Liverpool at Anfield in the last two seasons except Manchester City, and their 4-3 defeat last season was at least competitive by the end.

With a trip to the Etihad Stadium coming up next, Emery needs to fine-tune his tactics for the big away games – especially given how he often seems to get it right at home against these teams. If not, another rout could be incoming.

Emery’s main focus should be on his defence, but not just for the big away games. Despite hopes that the Spaniard would automatically make Arsenal better at the back, that hasn’t been the case: the north Londoners have conceded 32 goals in 23 league games and kept just four clean sheets. Only Fulham (2) have managed fewer.

Of course, Emery will naturally need more time and hasn’t been helped by niggling injury problems for his defenders, but more is expected – particularly as Arsenal invested in that area last summer, and the numbers say they have committed the most errors (7) leading to a goal of any team in the Premier League. They haven’t seemed to fix their defending of counter-attacks and set-pieces either.

The good news for Gunners is that it’s something Emery recognises. Speaking about the team’s defensive issues earlier this month, he said: “We are in a transition where we are looking for a balance. There are times when defensively we have not been very solid, but we have still won because offensively we have created a lot of chances.

“So, at the moment, I am still leaning towards making sure the team doesn’t lose what it has. But yes, it’s true that we have to achieve greater defensive solidity.”

One of the key storylines for Arsenal this season has been their width, or lack thereof. Alex Iwobi and Henrikh Mkhitaryan are Emery’s only proper options on the flanks, and although the former has improved under his new manager, Arsenal could still do with some more proven competition.

Pierre-Emerick Aubameyang has played on the flank but isn't a natural wide player, and nor is he regularly effective with limited space. For much of the season, Emery was also relying on Sead Kolasinac and Hector Bellerin for width to good effect, but the latter’s recent long-term injury means the issue has been highlighted even more.

Despite his performances dipping this season for Inter, Perisic has still created more chances (1.7) per 90 minutes and averaged more penalty box shots (2.4) than Iwobi, Aubameyang or Mkhitaryan this term. Arsenal could certainly use a player like him, given the market right now.

Another theme of Emery’s debut season so far has been Arsenal’s poor starts to games. Despite a 22-game unbeaten run in all competitions earlier this season, the Gunners have only held a half-time lead in three matches this season.

Many pointed to Emery’s tactical switches or half-time substitutes changing the outcome of those games as a consolation, but it's becoming increasingly clear that there is a deeper problem – Arsenal are having a tough time breaking down teams; in particular, the ones they're expected to beat.

Emery’s squad lacks the personnel to regularly work in limited space against teams that park the bus against them. Because of this, they have struggled to create chances consistently – they average the 10th-most shots in the league – which leads to tight, edgy games. Sometimes they can get away with a win thanks to the predatory instincts of their frontmen, but too often they don’t – like with their three straight league draws from late October to early November, and more recently, dropped points against Brighton and West Ham.

It will only be harder when Aaron Ramsey departs in the summer for his reported Juventus move.

SEE ALSO The end of an era – but how will Arsenal fans reflect on Aaron Ramsey?

QUIZ! Can you name the Brazilians with 20+ Premier League appearances?

Arsenal need to be more creative, which only makes the current Mesut Ozil situation more bizarre. It’s far from ideal for the club’s highest-paid player to be on the fringes, but that’s where the German is, seemingly frozen out for not suiting Emery’s style.

Ozil still averages a joint-team-high 1.8 key passes per league game along with Kolasinac (which further highlights the creativity problem), and despite his flaws, it’s clear that Arsenal are a better side with him in the team – at least creatively.

In addition, while summer arrivals Lucas Torreira and Matteo Guendouzi have impressed so far, they (along with Granit Xhaka) don’t create chances consistently enough from midfield.

More help is required, particularly if Ozil continues to miss out. Recent links with the likes of Denis Suarez, James Rodriguez and Christopher Nkunku all sound logical, but whether any of them will actually join remains to be seen.

Emery has had a mixed start to his Arsenal tenure, but it can still be a successful debut season for the former Sevilla manager if these areas can be improved in the second half of the season.