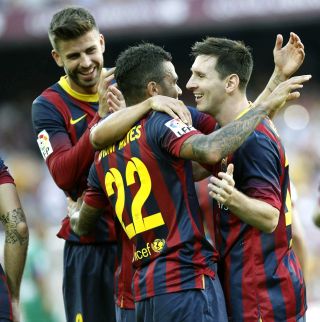 A very handy and most familiar way to kick off a league career for Tata Martino at Barcelona - an absolute tonking of a team at the Camp Nou. The pressure upfront was good, the passing zippy and defence barely called into action in a comfy 7-0 thrashing of Levante. What’s more, Tata also had the power of Greyskull to take a fully fit Leo Messi off the pitch for the first time in about three years. “The monster is hungry,” warned the headline in Monday’s Marca.

Once again, Rayo were dismantled over the summer - but once again they've managed to rebuild and come out swinging. It's too early to say whether the 3-0 home win over Elche was because the Vallecans were very good or the Alicante outfit were utterly hopeless, but the win was an incredible confidence boost for supporters and manager Paco Jémez alike. “We don’t want to set objectives but just go from week to week like last year,” beamed the Rayo boss.

A brace against Sevilla in a 3-1 win at the Sánchez Pizjuán for 24-year-old Diego Costa. Perhaps the Brazilian, rather than David Villa, will be the long-term replacement for Falcao’s goals.

Jagoba Arrasate
If you're after a gentle warm-up to start the season, the visit of Getafe can be perfect. Real Sociedad have a extraordinarily difficult double-header against Lyon in the Champions League so Saturday’s 2-0 win was a handy confidence boost for rookie boss Jagoba Arrasate on his first proper assignment. “We did more good things than bad,” was the verdict of the coach who has taken over from Philippe Montanier in San Sebastian.

The new Swiss striker arrived in pre-season looking fairly tasty and has continued that vibe with a goal on his La Liga debut for Sociedad. While la Real may be slightly weaker in the midfield department after the departure of Asier Illarramendi to Real Madrid, their forward line is looking far stronger with Carlos Vela, still around, the scorer of the Basque side’s opener on Saturday.

We offer a hearty welcome back to Villarreal and their expensive Mexican import after Monday night's thriller against Almería. At 2-1 down with just seven minutes left, Villarreal's summer import from relegated Mallorca looked like being a bit of a damp squib - that is, until he popped in an equaliser and then set up Jonathan Pereira for the game's winner. Carry on, then…

Iker Muniain
Once again there are an awful lot of beady eyes focused on the forgotten man of promise, Iker Muniain. The wee ankle biter has only scored three league goals in the past two seasons for Athletic (in 66 appearances) but got the winner for the Basque club in their 2-1 victory at Valladolid. “Bart Muniain smiles again,” was the cheery message from Marca, for a footballer who has been rather morose of late.

A solid 2-1 win at Osasuna adds further weight to the prediction of many that Granada are going to be the surprise package in la Primera this season.

Cristiano Ronaldo was quiet, Mesut Ozil was stuck out on the flanks and the defence was having a bit of a shocker against Betis' rapid attack. Fortunately for Real Madrid, Isco made sure that the league title race was not over by the end of August with an assist for his side’s opener, followed by a salmon-like header five minutes from time. LLL originally thought the Málaga man was too pricey and unnecessary for Carlo Ancelotti. The blog may have to revise its musings.

A grim evening for those who managed to endure this match until its conclusion at nearly one in the morning. Valencia scraped it 1-0, but they didn't have much upfront to trouble a Málaga side geared for a draw. Instead a scrambled free-kick and Willy Caballero error made the difference at the Mestalla. “We sacrificed ourselves for the team,” admitted Valencia boss Miroslav Djukic, “but we did not play well.”

Pepe Mel’s side were a little unlucky not to come away with a point at the Santiago Bernabeu. Indeed, Verdú's effort, soon after the visitor’s opener, might have done the business. Nevertheless, at least there are signs Betis will still be one of the funnest sides to watch for the third year running.

At least the Madrid goalkeeper was able to pick up where he left off in the paperback shoved behind his seat on the Madrid bench - Diego López was again chosen to play between the sticks against Betis. The concern now, though, is that any more time spent on the bench could see Casillas turning all Sheldon from Big Bang Theory - “you’re in my spot”. There’s no doubt the club captain is already at his manager’s door every five minutes looking for an explanation on his current predicament. “Carlo?” - *knock, knock, knock*… “CARLO” - *knock, knock, knock*….

Celta Vigo
A careless two points dropped at home against Espanyol. Two goals up at half-time, they ended up with a 2-2 draw against the Pericos.

Led 2-1 with seven minutes left but allowed Villarreal a late double to begin the season with a hefty blow.

A 2-1 home defeat to Granada - and an Osasuna side looking distinctly short of ideas and goals. Unfortunately they're the same problems suffered by the Pamplona side last year.

A hard-working Málaga were undone by a set-piece balls-up from goalkeeper Cabellero, after looking good for a handy point at the Mestalla. However, it seems Lord of the Laughs a.k.a Bernd Schuster, knew all along the evening would end badly. “I calculated zero points from the first three games,” sighed the German on his side's matches against Los Che, Barcelona and Sevilla.

Sevilla
A bright pre-season and performance in Europa League qualifying was undone by a home defeat to Atlético. To be fair though, Sevilla didn't look all that bad. Indeed, Unai Emery was able to see the bright side of the 3-1 loss. “Sometimes it is necessary to lose to get some balance, most of all internally, so we do not believe everything will be easy,” mused the touchline-squatting Señor.

Poor Luis García returns at the start of the season with a familiar refrain. “We have to take a step forward and be more intense,” he said after his side's 2-0 defeat at Real Sociedad. Getafe, it seems, are like a team full of Karim Benzemas. Apart from the moments of exceptional brilliance, that is.

“I never saw us in the game,” sighed Elche boss Fran Escribá after a tough start to the season - a 3-0 defeat to Rayo.

Not a great way to kick off the campaign with a 7-0 defeat - but the feeling is that the result could have been a whole lot worse, had Barça not taken things a little easier in the second half. “It looked like a testimonial,” sighed a weary Joaquín Caparrós, with the Levante boss admitting: “we’ve left the dentist and now we are moving on to the next thing. We should play Real Madrid next week and get the two out of the way.”