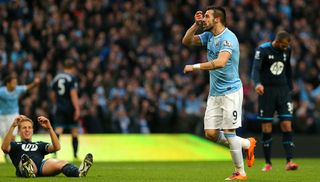 In need of assistance ahead of the midweek football action? Worry not, as Bet Butler are more than happy to steer you in the right direction.

They've got tips on two of the key tussles in the Premier League, with the Merseyside derby taking place at Anfield on Tuesday night.

Wednesday then sees Tottenham Hotspur host Manchester City, who trounced Spurs 6-0 earlier in the season. The Blues will be looking to complete the double over the Londoners and return to the top of the table.

We'll also give you the lowdown on the Football League sides missing key men and begging to be taken on - featuring Nottingham Forest in the Championship, Peterborough United in League One and Northampton Town in League Two.

The first Merseyside derby of the season was a 3-3 thriller, and with both teams still occupying positions in the top six and separated by just one point this is one of the biggest meetings between these teams in years.

Liverpool have won 10 of their last 12 home matches and have scored at least twice in each of their last 8. Furthermore, they tend to score early, having netted before half-time in 11 of those 12 games. While it should be noted these haven’t been the hardest run of games, they do also dominate the derby record and haven’t lost to their neighbours at Anfield since 1999.

Everton have lost just twice this season but they’ve kept 1clean sheet in their last 8games and the goals have also started to dry up as they’ve scored only 6 times in their last 6 away matches. With injuries to Ross Barkley, Gerard Deulofeu and now Bryan Oviedo they look set to struggle. Particularly given they’ve lost 8, and won 0 of their 13 trips to top-six finishers in the past two seasons and teams currently in the top six this term. At 1.85 Liverpool look a cracking price for the win.

Just 2 of Liverpool’s last 17 matches have featured fewer than 3 goals and 7 of their last 8 home games have seen 4 or more strikes.This fixture finished goalless last season but that came in Luis Suarez’ absence, and given their first meeting this season we can’t see that happening again. With 6 of Everton’s last 8 away games where they’ve conceded before half-time having at least 3 goals, backing Over 2.5 Goals should pay off at 1.70.

Spurs go into round 23 level on points with Liverpool in the fight for the final Champions League spot, having won their last 4 matches. They certainly come into this game in better shape than when these sides met earlier this season. Unfortunately for Tottenham, Man City have won 10 of their last 11 games starting with that 6-0 rout at the Etihad Stadium.

With City in great form and having won 14 of their last 20 away games when scoring – including 4/5 at top-six sides – while Spurs have won only 1 of their 8 matches this season against the current top eight, the away win looks the way to go at 2.05.

The bet we like best in this match, though, is over-goals. Thirteen of City’s 22 matches this season have witnessed at least 4 strikes, and given their fairly average clean sheet record it appears they’ve been happy to get into open contests. It’s been pretty effective for them – 6 of their last 8 wins have come despite conceding. Spurs have also looked a lot more dangerous since Tim Sherwood took over, and since 2011/12 all 5 meetings between these sides have had at least 3 goals, with 4/5 matches seeing 4 or more. Over 3.5 Goals looks a massive price at 2.5.

Lansbury has missed just 1 Forest game this season and that resulted in a 3-1 loss at bottom-of-the-table Yeovil. They’ve lost 8 of the 22 games he’s missed since the start of last season compared to just 9 times in 47 matches with him. When just looking at the home matches he’s missed, Forest’s record is not too bad, but Watford will surely have taken confidence from their showing in the FA Cup and can be backed at 3.80.

Tomlin received his third red of the season at the weekend after earlier scoring in the 5-4 defeat at Oldham. Since the start of last season, the Posh have scored 1.73 goals per game in Tomlin’s 55 appearances but managed just 1 goal per game in the 19 he’s missed. This has resulted in 7 of the last 9 away matches he’s missed having fewer than 3 goals as they’ve lost 6 times. Sheffield United’s form has been improving and they are 2.30 to win again.

Hackett has missed Northampton’s last 2 games and that has seen the Cobblers lose twice at home – both times by 2-goal margins. While their loss rate has been 35% in the 52 games Hackett’s played since the start of last season, this jumps to 55% without him as they’ve scored 24% fewer goals per game and also conceded 22% more. Rochdale are chasing promotion and look well priced at 2.35 for the win.