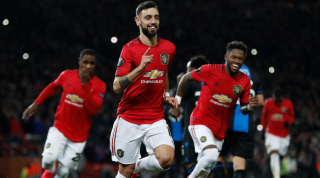 Bruno Fernandes played mostly as a centre-back until he was 15, according to his former youth coach, speaking in the May issue of FourFourTwo.

The Portuguese midfielder, 25, has shone since joining United for £67 million in January, picking up the Premier League Player of the Month award for February.

In a wide-ranging feature, those who knew Fernandes best as he made his way from Boavista to Sporting, via Pasteleira, Novara, Udinese and Sampdoria, tell us all about his character and ability.

Fernandes asked to be loaned to Pasteleira, a Sporting satellite team, explicitly because he was frustrated with playing in defence.

Antonio Peres, Fernandes’ coach during that loan spell, recalled the way fortune and skill combined to allow the teenager to excel in his new position.

“We were evaluating players – where they could produce more; which positions they should be playing – as we do at the start of every season,” remembered Peres. “If we’d had a No.10 in our team, maybe he wouldn’t have moved forward on the pitch.

“But we didn’t, and he took his chance. He was an instant hit – he scored in almost every game.”

A common theme among the figures that remember Fernandes is the 25-year-old’s exemplary and memorable personality.

And Peres echoed the sentiments expressed by several of the midfielder’s teammates and confidantes over the years.

“As a captain, Bruno set the bar very high for others,” he said. “He was always working on his own after training, taking free-kicks, doing shooting drills.”

Bas Dost was one player that struck up a particularly fruitful partnership with Fernandes when at Sporting, the duo plundering 73 goals in 2017/18 and 2018/19 alone.

It was the Portuguese international’s qualities off the pitch that stood out for Dost, however.

“He was already the captain in his second season there,” he recalled. “Although he was young, he had leadership qualities. He had good communication with the team and was already talking to the other players.”

Raphinha, at Sporting last season, mirrored Dost’s praise for Fernandes’ the man, as well as the footballer.

“He had an absurd importance to all of us,” he said. “He’s a born leader. He became a brother to me and I’ll be forever grateful.”

Peres suggested a source of Fernandes’ attitude is his humble beginnings, and the debt of gratitude he felt to his family as a result of their support.

“Before leaving [for Novara], his mother put €50 in his pocket in case he needed to buy anything there,” he said. “It was the most she could hand him at that point. But he still managed to get away with it – he’s a fighter.

“He’s a boy who never had a Plan B in mind. For some time, he relied on rides from others like me to get to training and pursue a career because his parents couldn’t drive. Bruno’s sole purpose was to give them some reasons to smile.”

Read the full profile of Bruno Fernandes in the May 2020 issue of FourFourTwo magazine, available in shops and online from Wednesday April 1. Our new magazine looks at how Cristiano Ronaldo came to the brink of setting an all-time international goalscoring record, reveals the 50 best players in the EFL, looks back on Marco van Basten and Euro 88, brings you the inside story from Greece’s unlikely victory at Euro 2004, takes in the rise and the fall of Michel Platini, and discovers the background of Bucharest’s brutal derby. We also chat to Andy Cole, Lukas Podolski, Ramires, Micky Quinn and more.